Purchase Date: May 2022
June 2022
What a fun motorcycle. I've been riding around locally as much as I can, breaking in the engine and drive-train properly; patiently awaiting the 620 1st service mile mark. I've also been collecting components to add to the bike after the service. I can't wait to start building onto this base.

So far with only a few hundred miles on the bike I can best compare it to a large mountain bike. Super easy to ride and more agile than anything I've ever ridden that's this large. And you barely notice the mass.  I'm looking forward to some exploration adventures with this large toy.
Headlight Protection:
It's probably a moot topic, that of damaging my headlight. Just in case, I couldn't pass up adding a Husqvarna headlight light plastic cover to the bike. It was super easy to install and doesn't hurt the looks either. 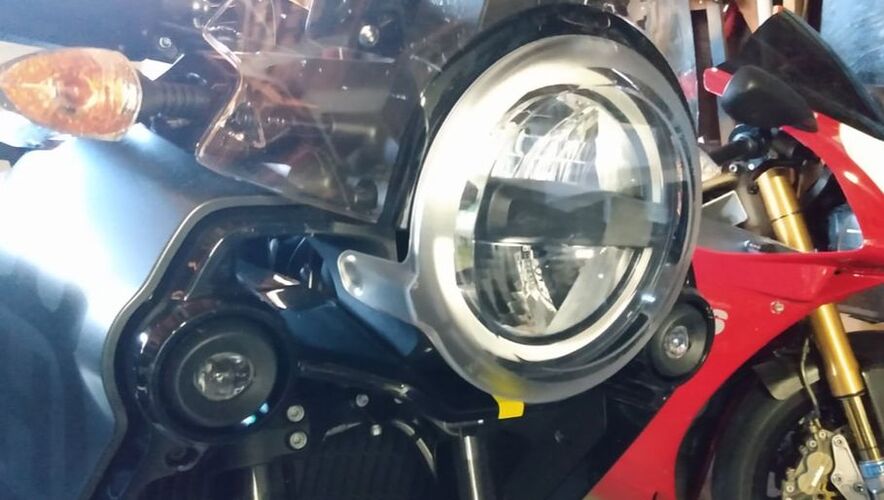 Tank Bag:
I've been hunting for the perfect tank bag for the Norden. I quickly found that there are plenty of options out there, it's a bit overwhelming. I, personally opted for a Wolfman Enduro tank bag for the size and water protection, not to mention the build quality. 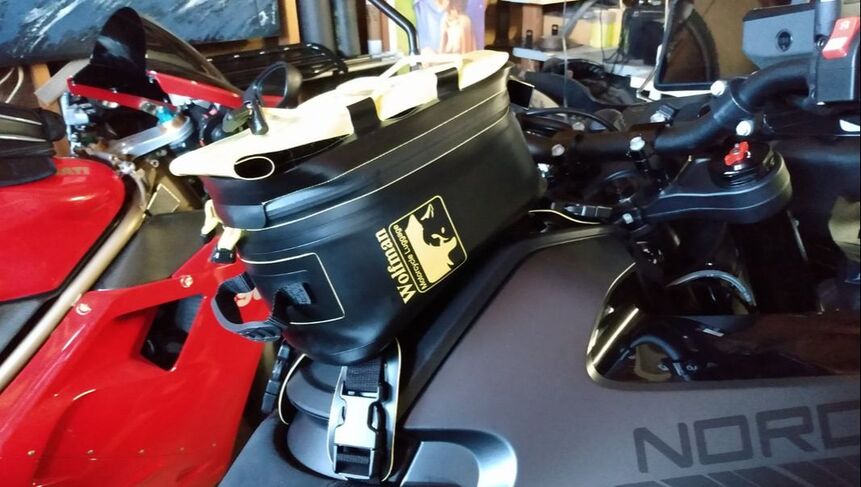 Windscreen:
Yes, the wind buffeting is as bad as everyone says. I had one of those small clamp on windscreens laying around and decided to give it a try. After much fussing with flipping it this way and that way, I finally figured out how it works for me and I'm happy with it. But I have to admit, as soon as I see an aftermarket windscreen that looks decent I'm buying. 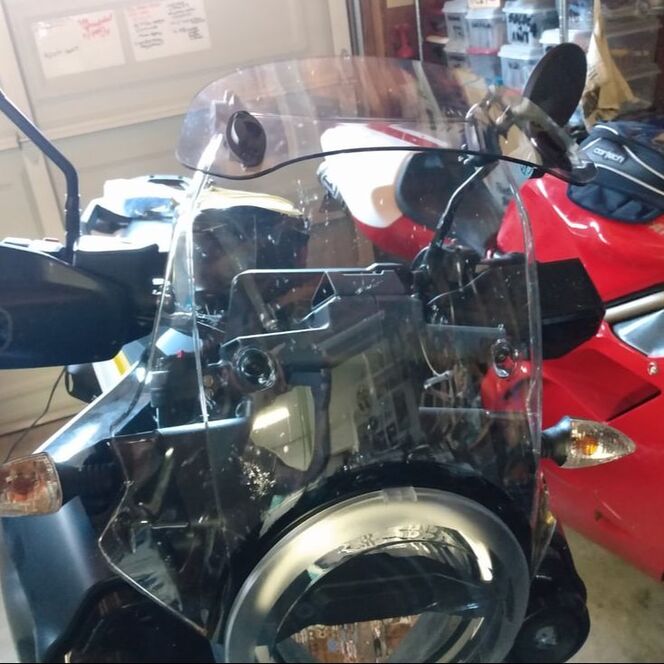 July 2022
Pannier Racks:
Outback Motortek Asymmetrical
I chose these because of the quality, reputation, price, tube dia and color. Simple enough. The exact ones I have on the bike are for a KTM 790/890, they fit with slight interference on the OEM exhaust can heat shield. The heat shield can either be removed or "massaged" a bit for pannier rack fitment. Another option is to get an aftermarket muffler can. I chose the "massage" route. Very happy with them.
Panniers:
Enduristan Monsoon Evo; 1x 24L and 1x 34L - different sizes for the offset rack, keeping the bike as skinny as I can.
These are great, simple bags. Light and easy to install/remove. I am not exactly a lightweight myself and wanted to keep the back end of the bike as light as possible while adding purposeful bags. These do the trick. They are well made and appear strong enough to take a beating. So far so good.
August 2022
Mirrors:
Listening to people on social media give a hard time about the round OEM mirrors, I gave in and purchased a set of Double Take Adventure mirrors as a replacement. I like the new mirrors, they are functional and will work great on long off-road adventures. Because of the ball-mount design I can quickly move them out of my way when not needed. Although I do personally prefer the round OEM mirrors. I think the OEM mirror quality and visibility are better, more functional for road driving.

Some people may argue that the OEM round mirrors have something to do with the poor wind buffeting. I can't agree nor deny that statement.
Engine Guards:
Due to the gas tank being very low on both sides of the bike, I wanted to install a set of reasonably low engine guards - to protect the plastic gas tanks. The Norden comes with thin aluminum side plates that protect the tanks and that may be enough but I wanted something that will take a significant hit. I chose to go with the Givi set that was originally designed for the KTM Adventure 790/890 series. The Givi TN7710 to be exact. I also wanted a low set that I can potentially add some highway pegs, if need be.

Givi equipment have a reputation for poor fitment with some of their products. These guards are no different. Installing these required some grinding, muscling and all out just staring at the many pieces of the puzzle while scratching your head before giving installation. There is a thick spacer that is supposed to be installed on the right side, per internet blog sites some people chose not to install this at all. I installed it on the left side because it brought the guards out close to the same distance as the right. The set in general is sturdy and I believe will take a good beating. They do add a small space for your feet if you choose to rest your feet up in another position while riding long highway miles.

All in all I'm happy with the Givi engine guards and would purchase them again. If someone reading this if purchasing them, round up some patience before the actual install for it can be frustrating. Good thing it only has to be done once. 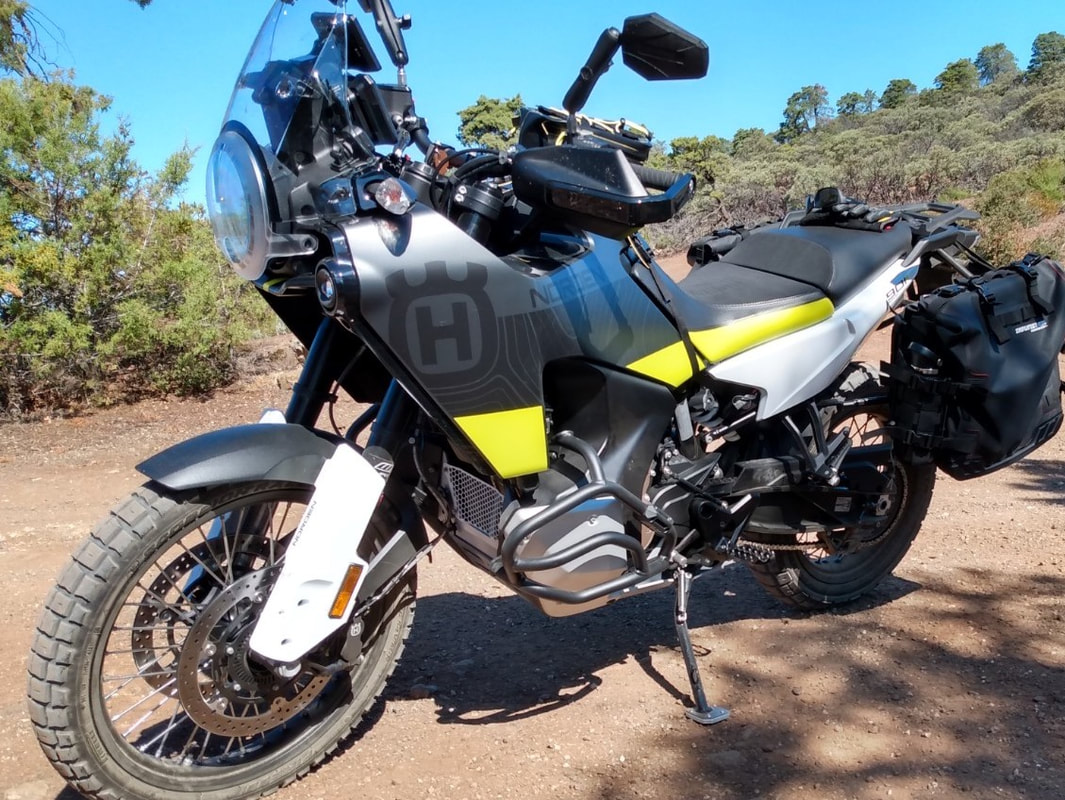 Kickstand footprint:
The kickstand, like most motorcycles has a standard footprint for street driving. When riding offroad it's a good idea to have something that will widen the footprint so as not to sink into the mud as easily or sand, gravel, etc...  I put on a simple Givi ES7712 side stand plate to take care of this. I was already purchasing the Givi engine guards and added this to the basket during my purchase. It was simple to install and functions as it should.
Skid Plate:
Before purchasing the Norden, I was obsessed with researching everything there was out there about the bike. I watched all of the YouTube videos and was sold on the Tusk quiet glide skid plate as a replacement for the thin OEM aluminum plate. Installing the plate was honestly a bit of a nightmare. It did not go on smoothly and was a frustrating install. I think when this was designed they didn't take in consideration how thick the underside rubber bumpers are. You have to force the plate into place with the hardware during the install. I don't see that a problem, but this was quite a bit. Then there is this little cup washer that mounts behind the brake lever, a frustrating detail. You'll find out what I mean if you purchase and install one of these yourselves. It will go smoother the next time during an oil change, but that 1st time there was some swearing going on under my breath.

The plate itself is very sturdy and I can see why there are rave reviews for this. If I could do it over, I would not purchase and install the Tusk skid plate, I would look for an alternative. Although I don't plan on bashing the bottom too often. I guess it only takes once so that's why I have it for that one time that can potentially damage the bike. Admitting, I don't think the thin OEM  plate would stand up to a solid blow.
Engine Protection Grill:
The OEM skid plate AND the Tusk skid plate both leave a giant gap between the radiator and the skid plate itself. I'm guessing this was a design consideration for airflow. I do believe both companies could have addressed this better by adding a small plate of some sort. Luckily the aftermarket world has just that, a small perforated plate that fits nicely inside the little section. The one I chose was an "Aluminum KTM engine protection grill". Like most parts for the Norden, this translates across from the KTM adventure 790/890 models and works well. My nuisance with this piece is that they give you some horrible button head screws with the kit where the head doesn't seem to fit any standard or metric hex wrenches, it's some odd size or just horribly mass produced with sloppy manufacturing processes. Anyway, I chose to drill and tap holes into the aluminum Tusk plate and use my own stainless steel metric screws. Looks so much better. Mud and road grime will not get so caked up inside the little nook anymore. Not to mention I won't find any critters nesting in there either.
Footpegs:
The OEM footpegs work great for day to day road use although when on the dirt they are way too small, I kept on bumping into the shifter. Just for kicks I bought the NiceCNC footpegs because of the reasonable price to try them on. They are great, I am not disappointed at all. Installation was easy once I figured out the best way to get the high tension spring back in, a wide flat head screwdriver was the trick for me.

There are lots of alternatives out there but not everything needs to be top dollar if it functions properly, as these do. If they fail for some reason I'll eat my words on this. 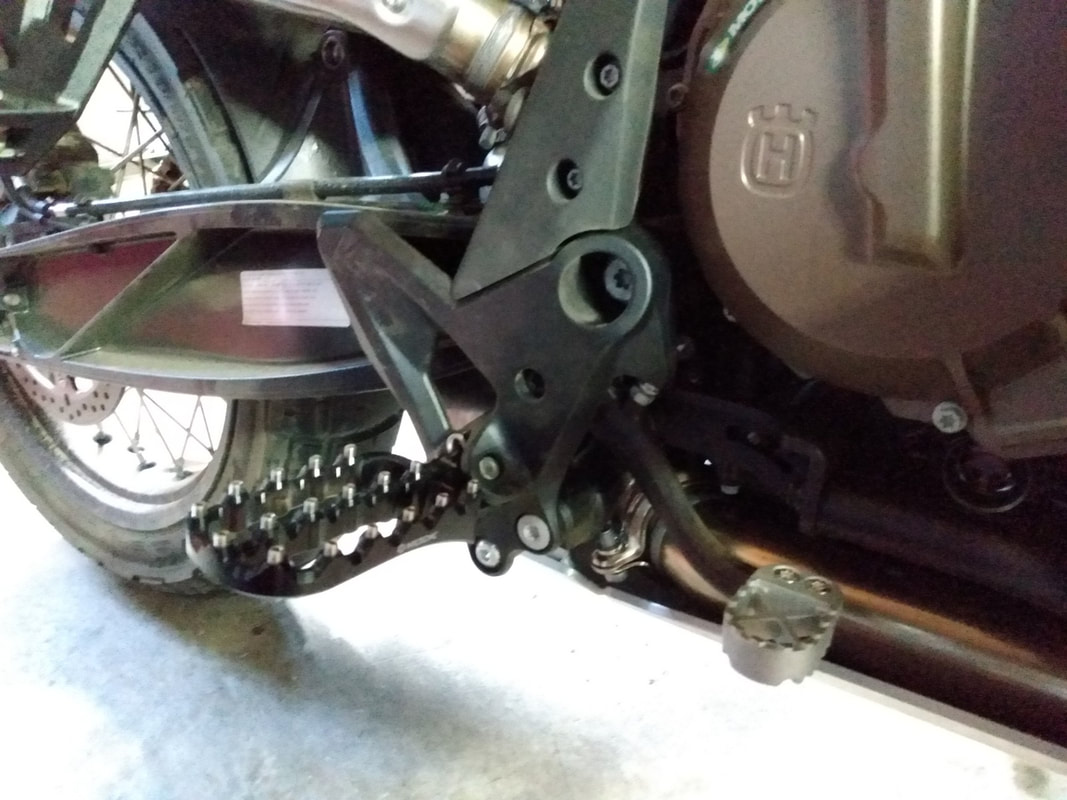 GPS Mount:
Another NiceCNC part I spent my hard earned cash on is the GPS mount for my Zumo XT.
The part fits well, functions well, happy with it - simple as that. 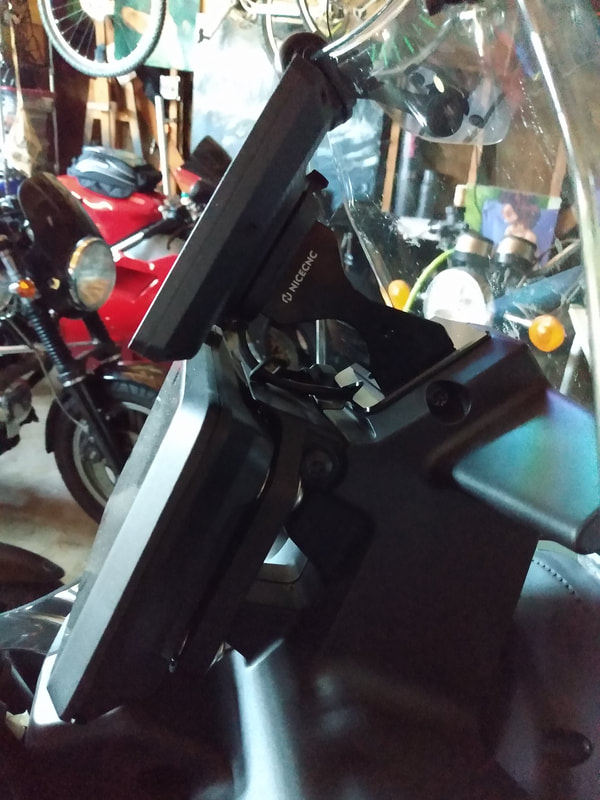 Tire Pressure Monitor:
A simple solution to the question, "Did I just puncture my tire?" is a common question for me when off-road riding. This simple Bluetooth plug and play Sykik contraption answers that question without worrying until the next stop. All you do is screw on the Bluetooth valve caps and it automatically reads on the display. You'll need to charge the display unit although it supposedly holds a charge for a long time. There are small watch style batteries in the caps themselves as well, those are just replaced. The head unit has several mounting options, I mounted this one in a convenient spot on the "dash" of the bike. So far so good (yes, my tires are low in the image). 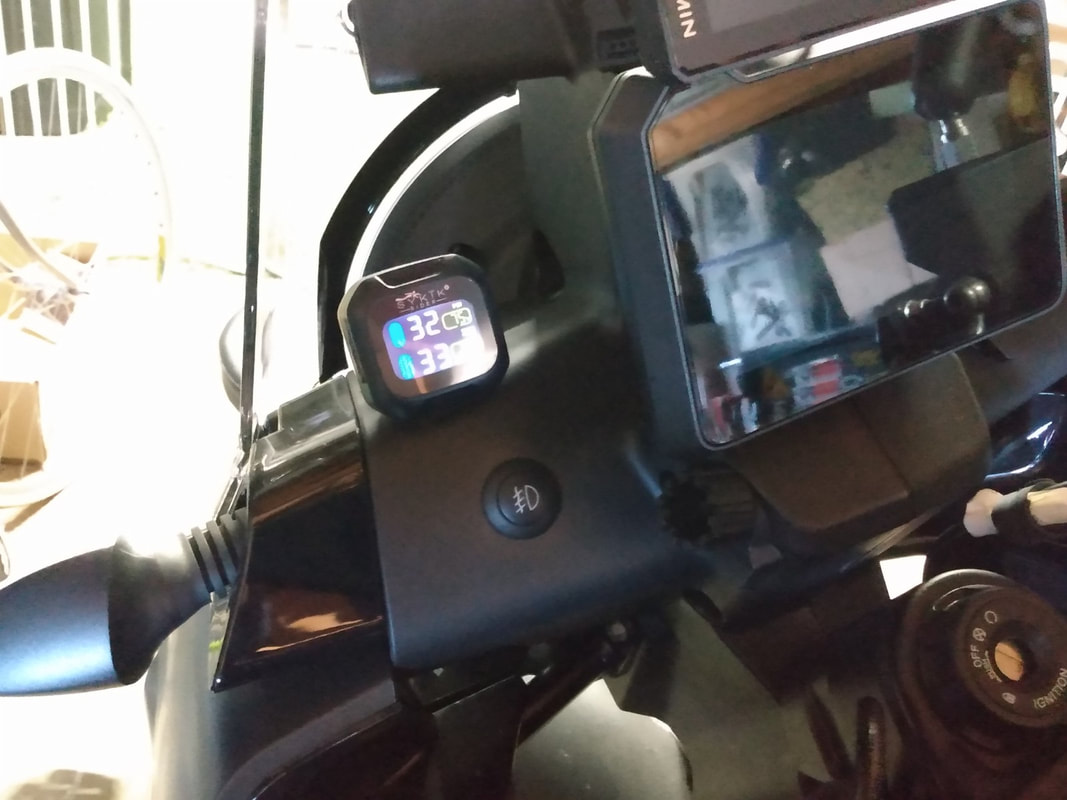 Coolant leak!
I noticed a small wet spot under the left side of the bike. I dipped my finger into the liquid and smelled it, sure enough it was coolant. I was hoping the Norden factory would've addressed this issue before mine was made, I was wrong. Luckily I've done my research long before even having the motorcycle in my possession. This is a consistent problem with many Nordens that come off the assembly line.

The culprit is a single hose clamp behind the radiator. The clamp can be accessed with a simple long flat-head screwdriver or an M6 socket on an extension. If you lay on your back with a flashlight and look up behind the radiator itself you'll see the hose clamp and accessible clamp screw. Nothing needs to come off the bike, the little nook above the OEM skid guard allows the access needed. For reference, mine was about 1/2 to 3/4 of a turn too loose which I think is significant.

After tightening the clamp, be sure check the coolant level. The level window resides just under the coolant cap if you are looking from the front of the bike, on the left side. The bike needs to be level when checking this, not on the kickstand. You'll also need a flashlight, the pink antifreeze is difficult to see and the overflow reservoir may appear empty without close inspection and some good light. Be sure to use the recommended fluid (Motorex M3.0) for top off and  be forewarned that the overflow reservoir is not very big, it fills up fast! - I spilled coolant all over the fairing, found out the hard way.
Photos and details of the Norden 901 will be added as the project matures.