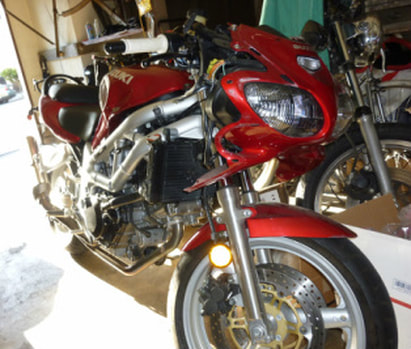 I was at a local motorcycle salvage yard rummaging through the rows of damaged motorcycles. After entering the small foyer where the less destroyed motorcycles were displayed for a quick sale, I spotted the SV sitting in the corner in a puddle of anti-freeze. Upon further inspection, the right side had common fairing and hand control damage from a low side accident, along with the water pump and clutch casings. Otherwise the motorcycle looked great and it appeared as if it had been garaged its whole life. The frame and forks were straight with only 8,000 miles clocked on the bike. A clean title was an added bonus. I made a deal with the owner and took the bike home.

The 2001 SV650S has a water cooled, 90 degree, V-twin engine. Dual over-head camshafts deliver the SV to 69.48 hp @ 9,000 rpm with a torque of 45.73 lb/ft. The Suzuki has a cable driven wet multi-plate clutch with a 6 speed gearbox. The top speed is 131.73 mph. The SV has a light aluminum frame keeping the dry weight low at 363.8 lbs. Suspension is basic with cartridge front suspension and a soft rear mono shock. A 4.49 gallon gas tank is moderate for distance traveling. 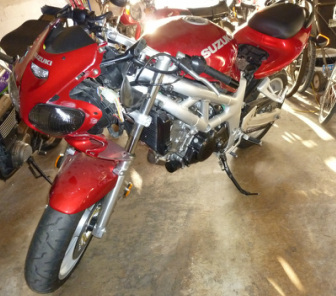 I analyzed the damage on the SV650S once I got it home. The first order of business is always to get the motorcycle running; cosmetics, second. Below is a list of updates and changes that I made to the Suzuki:

Water Pump Cover: Damage was extensive. I replaced the cover with a new Suzuki cover.

Clutch Cover: Replaced the damaged cover with a “like new” cover from eBay.

Exhaust: The exhaust headers were Akrapovic; a nice set that the previous owner installed. Unfortunately the muffler can was missing. I found a replacement with minor scratches that came off an R1. The connection collar was too big, therefore I designed an adapting collar for fitment. I purchased the muffler through a connection and the adapting collar was machined at a local machine shop.

Air box: Modified the stock air box "Snorklectemy". This is a popular, simple modification done by cutting the top of the air box out with a rotary tool.

Carburetor Synchronization: Using a Motion Pro manometer, I synchronized the carburetors. Dialing in the Suzuki. 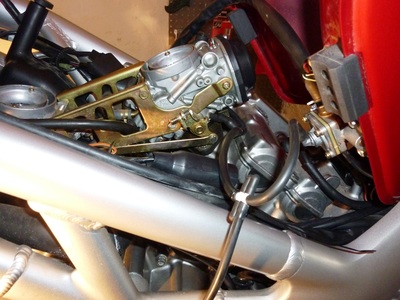 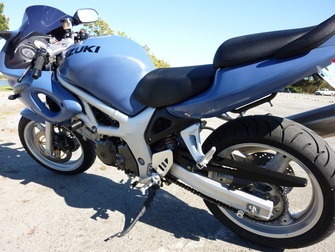 Clutch: After my initial testing, there was some difficulty shifting. I discovered that some of the clutch plates were stuck together from the bike sitting. I dropped in a new set of EBC clutch plates solving the problem.

Sensors: As a safety, both the kickstand and clutch have sensors in line with the ignition system. These are common causes for the motorcycle to fail so I disabled both sensors.

Charging: Installed an Electrosport Industries rectifier/regulator. This replaced the OEM component creating a more efficient charge for the SV. I noticed a brighter headlight and steady idle after the installation.

Coils: Replaced the coils after I rode it a few thousand miles. This solved a difficult electrical blip that was in the ignition system.

Signals: Installed a set of LED license plate flashers along with a new (LED) flashing relay.

Wind Screen: Added a Puig windscreen for decreased airflow drag at highway cruising speeds. Suspension: Rear suspension was too soft (squishy). After some fitment research, I found a '07 ZX10 rear shock on eBay that I dropped in with some minor battery box cutting.

Foot Brake lever: The right foot brake lever was bent sideways from the previous owner. I bent it straight after heating with a torch. 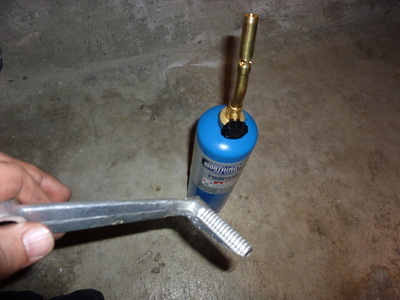 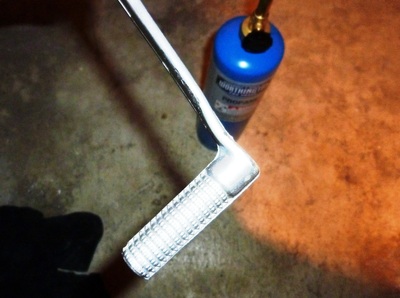 Miscellaneous: New handgrips, levers, bar ends, right foot peg.
Driving the SV650S is a lot of fun, the motorcycle is light and corners easily. Due to the high torque, the SV can easily lose grip cornering with a slight blip of the wrist.

The brakes are good, not over the top, and they stop the bike efficiently.

The Akrapovic exhaust has a nice loud, head turning growl.

High speed roll-on power on the Suzuki is lacking, although this is typical of most twins. A downshift or two is needed for passing.

Overall, the SV650S is a thrilling, fast torquey bike. I suspect performance, low owner cost and low maintenance are the reasons why it's been a bike of choice on the track for many years.
Sale Date: August 2013