Purchase Date: October 2021
After selling the MG and AJS, I had some cash burning a hole in my pocket. I haven't had a sportbike in quite a few years; therefore I was shopping for one.
To follow my thought process in shopping for this motorcycle there are a few "must haves": All of this helps me narrow my decision. I've looked at Honda RVTs, some Aprilias, maybe some raced out '90s liter bikes, and desmo' Ducati. My tastes had been jumping around all over the place looking at different bikes. I kept going back to the 916 style Ducati. One nice thing with Ducati motorcycles is that most people typically take good care of them, especially due to the (suggested) two year/12k mile belt replacement intervals. I made up my mind, on the Ducati 916/996/998 series. Next step, to find one with the proper upgrades and well maintained.
After some cautious online hunting via the usual searches and waiting for a bit to feel out my options I was looking at a 996 outside Denver. Then I noticed a large ding on one of the rims, it's just a rim but that tells me the owner wasn't being upfront and honest with the sale.

Moving on I found one at a dealer in San Diego, originally owned by the owner of the dealer. You know this was taken care of. Only thing was that someone had a deposit on the bike, so I was forced to move on even though it was perfect. The 996 had all of the accoutrements that I wanted, the Termignoni exhaust, magnesium rims, carbon fiber accents; it had it all. A few more days went by and something was different about the ad for the 996 in San Diego so I contacted them again and the were willing to sell because the person whom left the deposit did not come through. The rest was history after that, the bike was - is mine.
The 1999 Ducati 996 has a liquid cooled 90 deg "L" twin cylinder engine with 4 desmodromic valves per cylinder. The engine is powered by Weber fuel injectors and a digital CDI. Power output is: 112 hp @ 8500 rpm; torque 68.6 lb/ft @ 8000 rpm. The big twin is a six speed with hydraulically activated multi-plate dry clutch. Final drive is chain. The tank holds 4.5 US  gal., averaging around 43 mpg. Top speed is 162 mph. This Ducati has Ohlins front and rear, Marchesini wheels and a ton of add-on bits mostly via the previous owner; an "S - clone" on steroids.
November 2021
Water pump cover:
Right off the bat, after the 1st ride there was a leak coming from the aftermarket water pump cover. Frustrating although this is sort of expected when purchasing used. Good thing I can fix this stuff. The dealer I purchased the bike from was kind enough to send me a new cover and hoses. I purchased a new gasket and some Ducati silicone on my own. It took some time for all of the parts to come in, when they finally arrived the install was easy. During the install, I also flushed the coolant with fresh new stuff. Getting the bike to burp up all the air bubbles was a bit of a chore but it finally settled and all is well. Leaky aftermarket cover vs. new Ducati replacement in the pics.
Bar ends:
After the 3rd or 4th ride, one of the Rizoma bar ends started to come loose (previous owner). I took them off, added some blue threadlocker and re-installed; easy fix.

Turn signals - front:
There were no front turn signals on the bike. I purchased and installed a set of Rizoma's, they are a sweet addition. 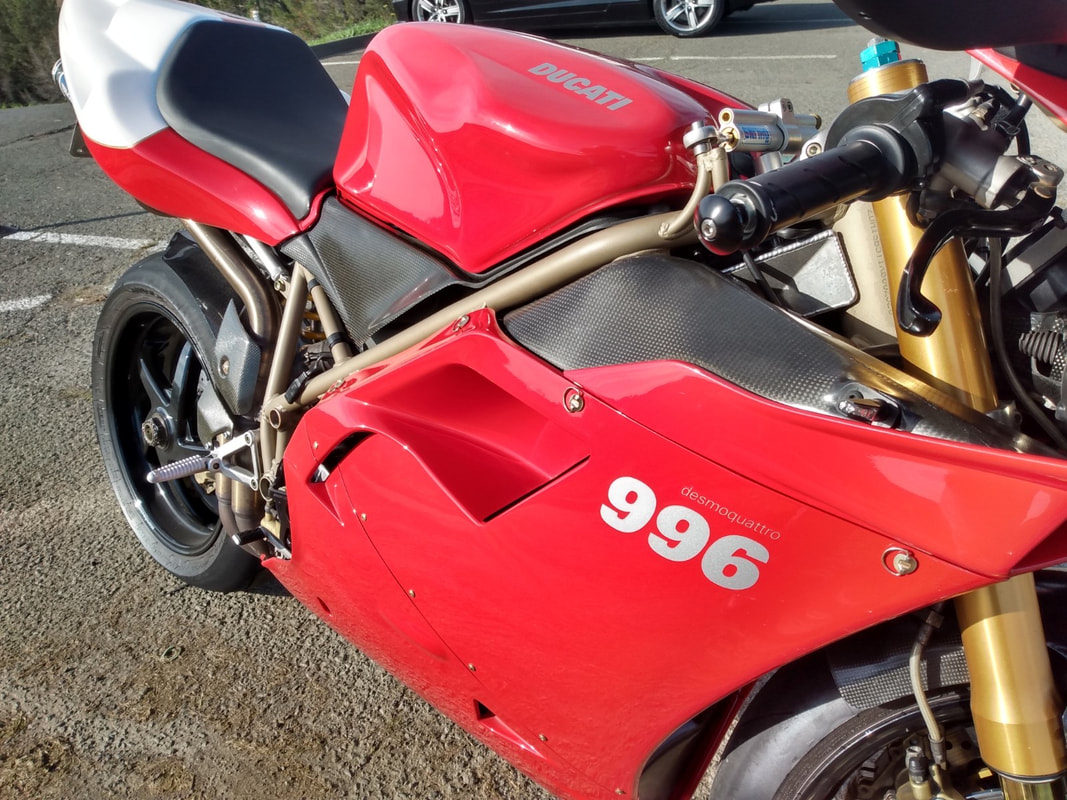 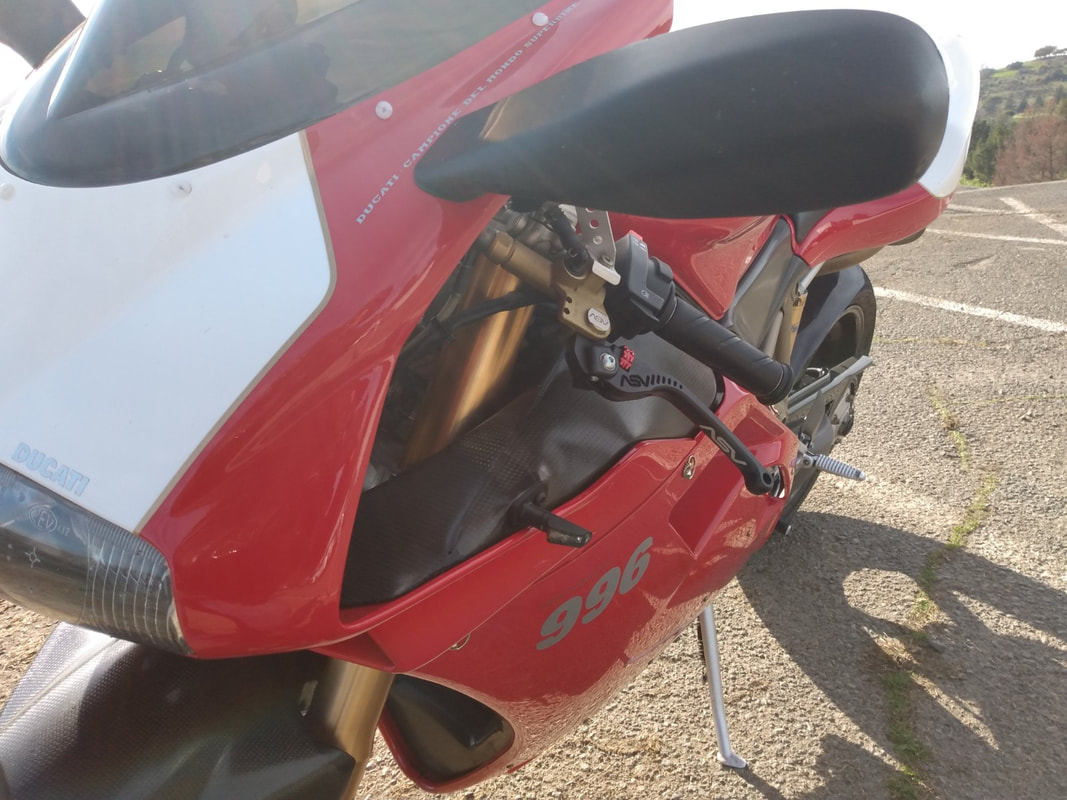 December 2021
Windscreen:
The clear OEM windscreen looks nice and all, but I wanted something more. I sourced and installed a dark tint Zero Gravity double bubble windscreen along with some nylon hardware to keep it clean. The double bubble style brings me back a few years when they were popular. I like my bubble. Be warned - the standard hardware doesn't fit, you have to get creative. 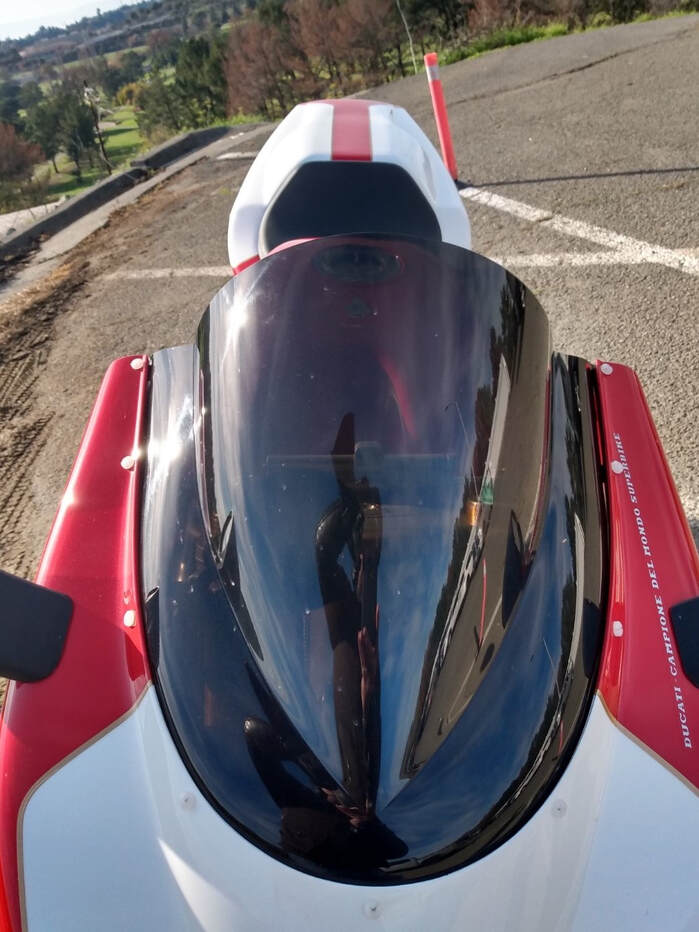 Relays Relays Relays:
The bike decided to quit on me going about 80 mph, I coasted for a minute with the clutch in then let it out and the bike came back to life. I carefully drove home without no further issues. When I say "quit" I mean it went black, everything turned off.
After some research, one common (easy) replacement while troubleshooting this is/are the ignition and fuel pump relays under the seat. I found a direct replacement to the Bosch units for only $12. each. I replaced both and so far no more issues although time will tell on this one. It appears that this may be a feared electrical gremlin, lets hope not. My guess is the relays witness many thermal heat cycles from the exhaust pipe being so close and eventually fail. I may put a small piece of heat shielding tape underneath the relays just in case.
Clip-on, comfort and handling:
The aggressive OEM clip-ons with the superbike OHLINS were a bit too much of a lean for me. This is not a track bike (yet), only street riding and of course back road canyon + twisty roads. I need some level of comfort from this beast. I opted for a set of 1 inch rise Woodcraft clip-ons. Installation was a bit of a pain with drilling, and some OCD with getting the bars even and level with each other and making sure there is no interference. Once installed they are well worth the effort. The riding position is ever so slightly different, albeit just enough to do the trick and add some comfort (if that's possible).
May 2022
Kickstand:
The OEM kickstand gives the bike a serious lean. After researching, there are a few replacements out there but most of them are out of stock and difficult to get. I am also tired of the spring loaded suicide kick-leaning bike. The biggest nuisance I have is getting gas, I'm so afraid the bike is going to fall over. I decided to hunt down a 1098 kickstand, this is a popular replacement. I found one off an 848, which is the same as a 1098. After installation it is much better, the bottom pad is larger and the angle isn't so aggressive. The difference seems minimal although it just feels much better with the larger pad; a bonus is the suicide spring action is replaced with the 848 spring attachment -  no more unwanted spring-ups.
BTW, if you are doing a 996 kickstand replacement as well make sure the 1098 stand you are using is not from a street-fighter; it is too short. Also, use the linkage bracket from the 996, not the 1098.
December 2022
Fuel filter + quick connects:
I had a slight leak coming from the black plastic fuel disconnect. Upon removal, the threads broke off completely into the tapped  threads within the gas tank. I slowly and carefully chiseled the old brittle plastic away a little at a time with a tiny flat-head screwdriver, then re-installed a new set (with a thin layer of teflon tape) of both white and black ones purchased from Gotham Cycles.
With the gas tank in hand this was a good time to replace the fuel filter & all the inside tank fuel lines, especially not knowing if the service was ever completed on this bike. The filter and submersible fuel lines I purchased (also from Gotham Cycles) were a direct fit. The kit came with everything needed including tank gasket and new hose clamps. I used three longer screws with nuts to help drive the fuel pump/filter assembly with a new o-ring in place (silicone grease on the seating o-ring) carefully back into the tank. No problems.
For the male side of the disconnects, I recommend installing a new set of viton o-rings. I also completed this task during the service.
Photos and details of the Ducati 996 will be added as the project matures.