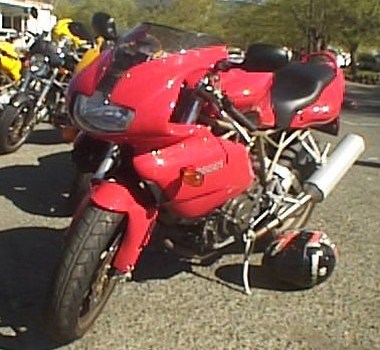 Growing up, the Ducati's sleek 90 degree engine, Italian lines and bright red paint have always caught my attention. One day, while I was walking to work through the business district of downtown Oakland, I came across a 900SS with no fairings. I Immediately fell in love with the Ducati and wanted one of my own.

After making the purchase, it was a long day waiting for the Duc. I was sitting in the dealership parking lot for hours. Hungry and tired, my nerves were just about depleted. It felt as if I signed my life away. Finally, the salesman wheeled out the Italian machine and went over the basics with me.

After listening to the salesman ramble, it was finally time for me leave. Sitting on the rumbling Ducati sent chills up my spine. I stood the motorcycle upright, the spring loaded kickstand snapped back and startled me as if I broke something. This was a new (odd) function to me. The odometer read exactly 00007 miles.

Driving a new motorcycle was an experience. I was more familiar with older motorcycles; the ones with stiff clutches, tight throttles, clunky gearboxes and small quirks about them. Everything worked on this bike and it worked easily, uncomfortably easy to me. 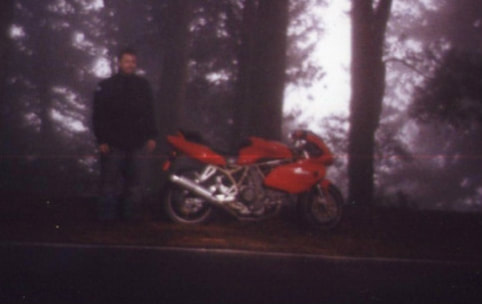 Highway 17, Northern California
There were exactly 22 miles on the odometer when I decided to get gas, the dealer didn't leave me with much. I pulled off at an unfamiliar exit and turned into the first gas station in sight. I was still shaking from the adrenaline of a new motorcycle and extra careful with every move I made.

I arrived at the gas pump. I immediately found that lowering the kickstand even had its quirks. It was spring loaded and wouldn't stay extended without the motorcycle's weight holding it down. It was almost as if the kickstand was designed for a quick getaway. I filled up the gas tank and set off for home.

There's only one way to exit this gas station - a right turn, when I needed to go left. I made the right then made a small u-turn back to the intersection. Two seconds later, a police car was flashing its lights in the rear view mirror. Without realizing, I made a u-turn in front of a fire station. This was my first reminder (aka ticket) that I now owned a bright red Italian sport bike. This day is becoming expensive. 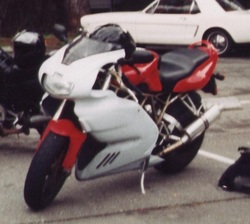 Some minor modifications I made to the motorcycle during my ownership:

Exhaust: I opted for a simple cost effective Two Brothers slip-on to get the throaty sound I wanted (wasn't looking for any major performance gains).

Fairings: This 900SS originally had the smaller half fairing. I later added the Sharkskinz Racing full fairing, keeping it primer grey, nice and dull the way I like it.

Low end torque is strong, the front end snaps up easily. The Ducati pulls hard coming out of corners, great for controlled power slides. The 900SS swings easily, it's well balanced in cornering from side to side with a nice stiff suspension. On the straightaways, the low horsepower against comparative liter bikes is the Ducati's Achilles heel. The internal drive belt and valves require maintenance checks at low intervals, which can get expensive if you're not servicing it yourself.

I logged 18,000 miles onto the 900SS before selling it. Driving the twin was a lot of fun. I hope to have another Ducati in my garage soon.