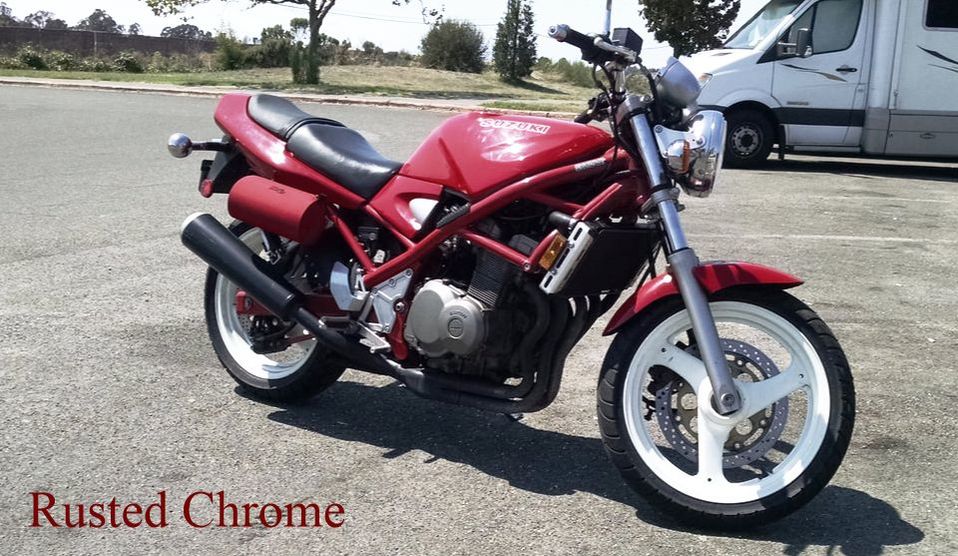 Purchase Date: July 2017
While hunting for the perfect motorcycle for Hillary to blast around on, we discovered the Suzuki Bandit 400. It wasn't my first choice although for the price range there isn't much out there with girly style points and everything she needs in a bike. We've been looking for several months and the motorcycles we've been coming across were either too large, too small, no electric starter, too expensive, not running, not title, etc... The Bandit fit her perfectly.
Hillary was the one to find the motorcycle. She found it on Craigslist for sale by an owner whom was moving out of the area looking for a quick sale. The bike was located in Santa Cruz, not too far away. We packed up the truck in preparation to haul a bike and made our way to the coast.
Upon arrival at the owner's house the bike was idling, ready for a test drive. Typically I like to be present when the bike starts cold, to witness the cold starting sequence. This is also a good time to listen for any unwanted sounds and watch for smoke. I overlooked this, assuming all was well because the bike just sounded so good sitting there idling (later I would learn to regret this decision).
I took the bike for a short test drive. After rounding the first corner, the bike almost stalled. At this time I quickly put the choke on just a nudge. My thought process is that the bike isn't quite up to operating temperature, the idle quickly cured itself. The response is good and the bike is fast, much faster then I anticipated. This is a fun little bike although I have to admit the seating position is a bit aggressive for me, the pitch of the seat forces you to slide into the fuel tank. The bars are a good height, steering feels heavy. You have to expect such nuances with something of this era, all just things you get used to while owning.
The Bandit is in good condition, all stock with almost new chain and tires. There is black soot on the end of the tailpipe signifying a rich condition; the owner claims it's from choke starting, I find this a bit odd - more details to come out of this later on.
We are happy with the price, no negotiations are necessary. The cash / paperwork transaction is made and we pack up the truck with our new '92 Suzuki Bandit 400.
The Bandit 400 has a liquid cooled, 398cc in-line four, dual overhead cam, four stroke engine. The engine boasts a surprising 50 HP @ 10,600 RPM (that is screaming on this little bike). Top speed is a modest 107 mph. The bike has a six speed gearbox with a chain final drive. Dual disc brakes are up front with a single in the rear for stopping power. The Suzuki weighs in at 419 lbs wet and has a fuel capacity of 4.23 gallons. ​
September 2017
Carburetors: The Bandit does not idle correctly, stalling intermittently. The idle will be high one minute and low the next. I installed new spark plugs and synchronize the carburetors, it helps but still has problems. The bike is running rich, I drive the bike around the neighborhood making adjustments to the air / fuel mixture screws dialing it in. After several adjustment attempts, I successfully corrected the rich condition and the bike runs perfect.
Chain: The chain is loose and dry. I cleaned and tightened it up.
Controls: The controls and switches were not working smoothly. I cleaned up and lubricated all of the components / switches.
Cables: I cleaned and lubricated the sticky clutch and throttle cables.
General Maintenance: I changed the oil, wrapped some loose wires and completed an overall tune up.
October 2017
Battery: The battery is weak and not holding a charge. I sourced and installed a new sealed battery with a charging attachment sae fitting.
Horn: Hillary wants a loud horn on the bike. I told her to choose something, she chose the Denali Soundbomb. I made and installed a new bracket to retain the horn, I also wired the included relay switch and fuse to the battery. This horn is loud! I find a reason to use the horn every chance I get. I might be installing these things on other bikes. People on their phones in cars can hear you loud and clear.
January 2018
We've decided to sell the Suzuki. In preparation for the sale, I replaced the Denali horn with the original. The bike was fun for the time being.

The Bandit was an easy sell, I had it listed for a good price. I received a few hits on Craigslist right off the bat, several people were in line for this one. The new owner looked it over, took a small test drive and happily handed over the cash. Another great bike off to a happy new owner.
Sale Date: February 2018