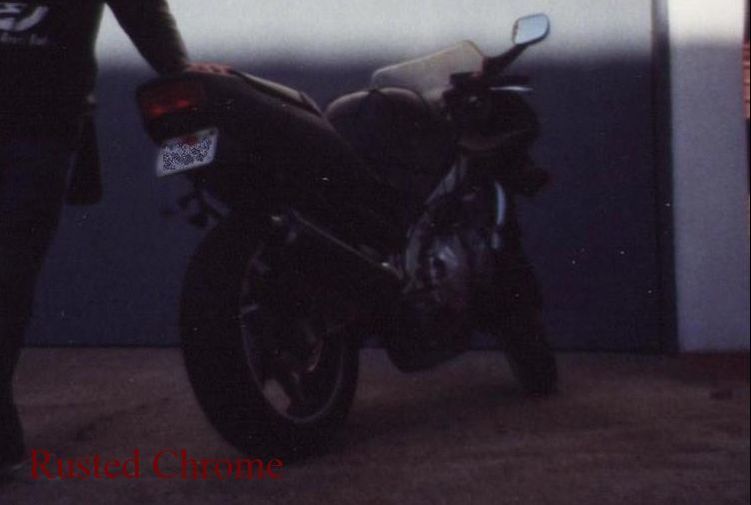 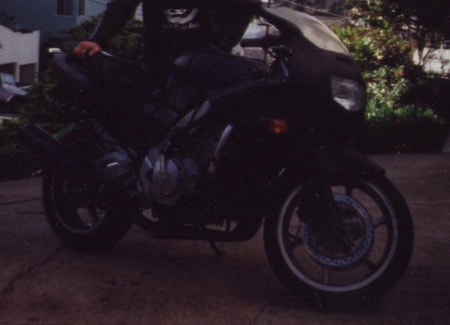 I was in search for a 600 cc low maintenance sport bike to use for daily commuting and found a CBR 600F2 on craigslist. The motorcycle was located in a sketchy neighborhood in Oakland so I brought along a friend and proceeded with caution. Upon arrival, a young man in his late teens directed me through the cramped back yard where the CBR was stashed.
​
The bike didn't have signs of abuse and there was no damage from sitting outside. Some of the fairings were missing, although this is common living in a city. Overall, the bike appeared to be in great shape. When the owner attempted to start it, we only heard a "click" when the ignition button was depressed. The oil was clean and full, no leaks, no external engine damage. I took a gamble and made an offer without hearing or driving the bike. Once I got home with the motorcycle, I found a blown fuse in the ignition circuit. After I replaced the fuse, the bike ran great without any problems.

The purchased CBR had a completely stock setup. I gave the motorcycle a flat black paint scheme covering some of the unwanted purple in the decals. I completed all of the basic maintenance: new brakes, oil change, chain lube/adjustment. A local shop installed a new set of Dunlop tires.

The cam chain was rattling and making a lot of noise at high rpms. I replaced the bad cam chain tension adjuster with one found at a local cycle salvage shop. This was an easy fix and immediately quieted the chattering.

The F2 was a nimble, fun motorcycle with a smooth high rpm power range. It was light compared to the liter bikes at the time making it fun racing in the mountains. In modern days, the F2 would be considered outdated. For commuting, the smaller size worked well for lane splitting while maintaining good gas mileage.

I drove this motorcycle hard on back roads racing with friends and crashed the F2 one Saturday morning ride. The high speed accident was a low side wipeout coming out of an "S" turn. The damage was mild. I came out of it with three broken ribs, some mild road rash and a concussion; a cracked stator cover on the bike. I shook it off and drove the bike home with a small oil trail behind. The hospital visit came a few days later when my chest pain became intolerable.

I replaced the stator cover with a used one from a salvage yard. Not long after, a low end knocking noise in the engine forced me to sell. I sold the bike to a couple of guys who were looking for a track bike.
Sale Date: Spring 2000