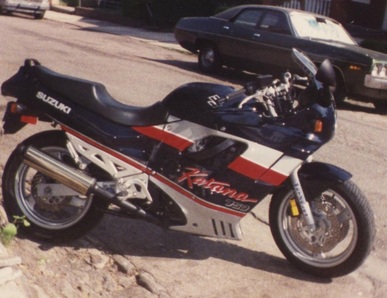 I was eighteen years old and wanted a sporty motorcycle to have some fun with. I would read in magazines about motorcycles increasing top speeds and low quarter mile times. The numbers were intimidating to me and I was not prepared for a liter bike such as a Yamaha FZR 1000 or Suzuki 1100 GSXR (probably a smart decision).

I did not have much income at 18 and my part-time job was not creditworthy for proper financing. I asked my father to help out with a loan, which was daring for how strict he was. Albeit to my surprise, he was open to it and took out a small loan through his job as long as I made all of the payments, missing one was unacceptable.

I found myself with a 1989 Suzuki Katana 750. Given my previous bikes, the power was an reasonable step up for me. 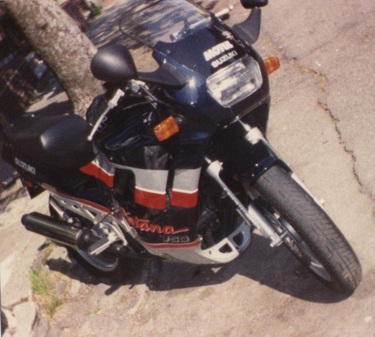 The Katana is a fun motorcycle. There is enough power put some fear into you while at the same time it has the right braking to make you stop. Posture is relaxed/sport. Suspension is average, not too hard not too soft. The engine valves chatter a lot during high revs, this is common with the Suzuki engines of the era.

I had a bad habit of accidentally knocking the Katana over in the garage. It actually happened 3 times! Clumsy. Each time one of the mirrors broke off and it cost me a $40 trip to the local Suzuki dealer.

I drove the Suzuki for about two years and made payments as promised. When I needed cash for a reliable car, my only option was to sell the Katana. I was able to get the exact same amount back for it that I paid. This put some extra cash in my pocket and the whole deal worked out well.
Sale Date: Spring 1996