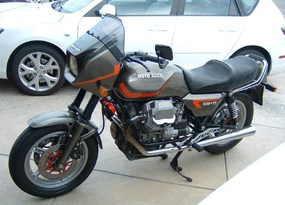 Moto Guzzi motorcycles have always caught my attention. The sound and style resonate with my attitude. When I saw the 850T5 on  craigslist for the right price, I had to check it out in person.

Off the factory floor, the Moto Guzzi 850T5 has an air-cooled 90-degree v-twin 844cc engine delivering 68.5 hp @ 7,000 rpm and a torque of 54.2 ft/lb @ 5,800 rpm. Fuel delivery is managed by a set of Dell'Orto 30mm carburetors with accelerator pumps. The T5 has long distance oriented fairings and bodywork mounted to the infamous Tonti frame. Disc brakes all around with 16" rims both front and rear. Later on in the manufacturing year, Guzzi replaced the rear 16" with an 18" for better handling. Koni rear shocks maintain the rear with standard non-adjustable telescopic forks up front. Max speed is a fair 120.8 mph with a gas consumption averaging around 48 mpg. The T5 has a noticeable dry weight of 494 lbs.
July 2013
After purchasing the T5, several long distance rides were in order. The rides helped me discover flaws that needed attention.

Charging: Driving with the headlight on at low speeds would draw too much power for the charging system, which would result in complete power failure. I replaced the diode board charging system with an Electrosport Industries rectifier/regulator and this solved the problem. Since then I've discovered several faulty OEM electrical connections with bad grounding and corrosion. This might have also played a role in my charging system failures.

Brakes: The linked braking system surprisingly works well with a balanced stop. For those unaware of this system, the rear brake line is linked to the left front disc and rear single disc with the front brake lever managing the right front disc.

Controls: Right side turn signal controls are clumsy and awkward because they are close to the shut-off switch.

Mirrors: The bar end mirrors that came with the T5 work well for visibility. Unfortunately, they interfere when placing your hand back onto the grip. These are not the OEM mirrors.

Suspension: Someone previously swapped out the rear shocks out for Progressive Suspension shocks. I suspect the same person replaced the front fork springs to help stabilize the ride adding some needed firmness and control.
October 2013
The T5 is currently going through some mildly extensive rework. The bear-like attitude of the motorcycle gave me the needed push to convert the Guzzi into a long and low café racer. Transformation is currently in progress.
July 2014
Air Cleaner/Filter: The OEM air filter assembly is a beast. It's been removed and K&N pod filters installed in its place. 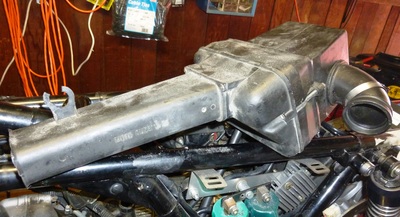 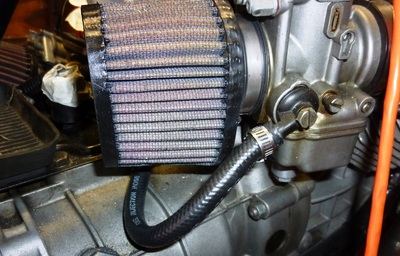 August 2014
After hours of grinding, scraping, filing, cutting, drilling, soldering, etc... the gas tank, seat, fenders, signals, tail light, etc... are all finally installed. I am getting closer to having the Guzzi back on the road. 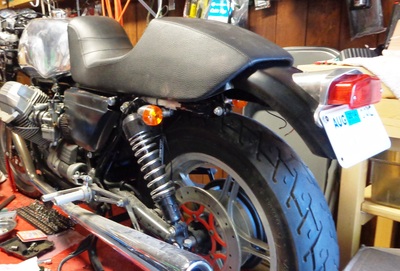 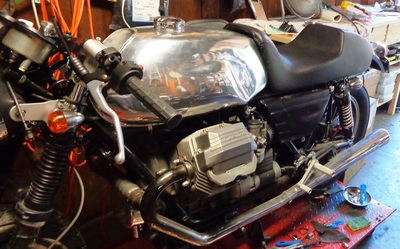 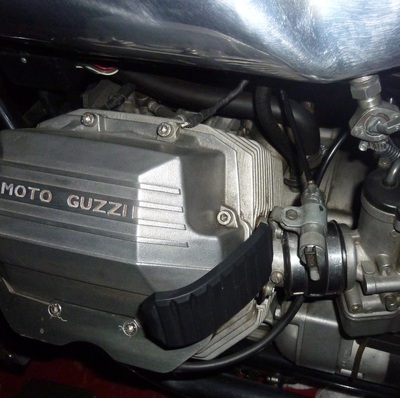 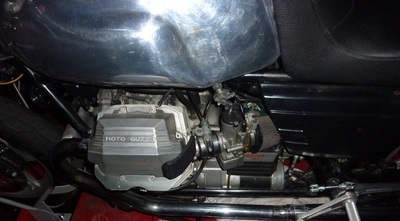 December 2014
Fuel System: I had interference issues with the original fuel line petcocks and the carburetor cables. I replaced the T5 style with a Lemans style set purchased from Eurotrash Jambalaya. 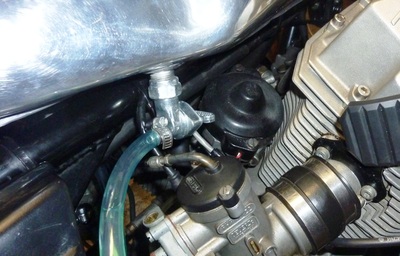 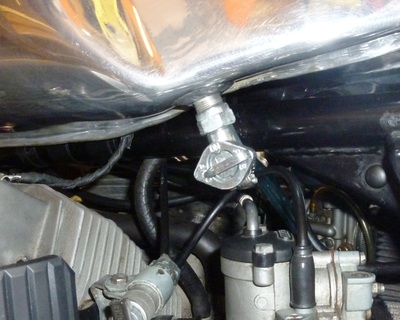 June 2015
August 2015
September 2015
Carburetors: The carburetors started hesitating at highway speeds. I ordered the rebuild kits and went at it. While I was in there, I discovered a small flake of rust deep in one of the carb passages. This must have been the culprit! I also increased the main jet size- testing the bike performance; definitely an improvement. I am going to run with the larger main jets for now, the extra fuel won't hurt.

Nameplate: I stamped out brass "Rusted Chrome" nameplates to add on the bikes.

Paint: The Guzzi got it's nickname "Scratch" painted on the tank. Thank you Hillary! 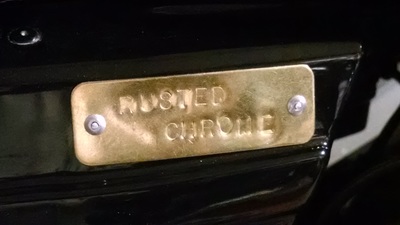 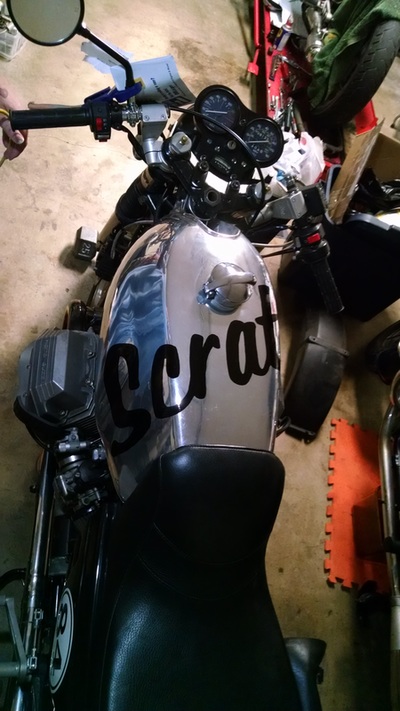 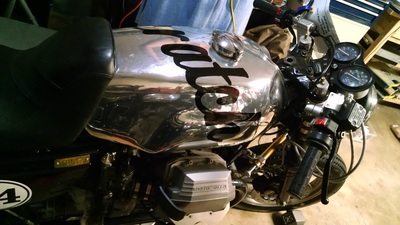 March 2016
Fuel Petcocks: I sourced and installed larger diameter petcocks for more gas flow. Highway driving had been cutting out, starving the engine under full throttle. The increased gas flow corrected the Dell'Orto's high demand for fuel.
This bike is incredibly of fun to drive! I can't get the smile off my face when driving.
February 2017
Tires: The Firestone tires look good, although as far as function -  they pull me side  to side on the drainage lined freeways where I live. I've decided to scrap them. In their place I installed Pirelli Sport Demons.
September 2017
Headlight: I removed the yellow tinting on the headlight.
Steering Dampener: Due to my over-adjusting the steering dampener, it wasn't working. I replaced it with a new one, this time clear anodized aluminum instead of gold.
May 2018
Battery: About a year ago I installed a Motobatt battery. The AGM battery worked flawlessly for exactly 51 weeks. Then it just simply quit. They honored the warranty and I replaced it. Hopefully the replacement will last longer.
June 2018
Headlight Fairing: I found a small headlight fairing that's originally for a Thruxton that fits the Guzzi perfectly. After installing, I roughed up the paint to match the rest of the bike. It looks great and hides some of the wiring under the gauges.
July 2018
Forks: The leaky standard air cartridges in the forks have not been cutting it, they need air pressure every other week. I sourced and installed a set of Bitubo cartridges set to my weight. So far, I'm happy with the performance.
Handlebars / Clip-ons: My back and neck has been bothering me and I think part of it is due to the aggressive clip-on position. I installed a set of old Renthal bars that I had laying around to remedy this and they work great. Not to mention that the bike feels more all around nimble. I should've gone in this direction a long time ago.
August 2018
The front end is cleaned up with the new fork cartridges and seating position. The motorcycle handles much better and feels safer due to my upright position. A plus is my back and neck don't bother me anymore while riding, the cafe racer position is too aggressive for me these days. I cleaned up the tank and added some Moto Guzzi decals from another tank; they look great. Scratch is back at the task of being my daily driver.
July 2020
Tachometer Cable: The original tachometer cable was bunching up making left hand turns. I sourced and installed a new cable, routed in a different - more manageable position.
Photos and more information will be added as the project matures.