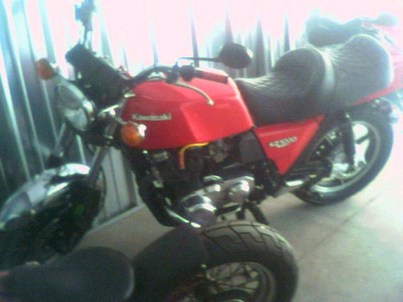 I received a lead on a Kawasaki KZ1000 for sale. I urgently drove over to the owner's garage and found the bike well covered, tucked away in a corner. Unfortunately the KZ had not been driven for some time and was running poorly. The bike needed a carburetor rebuild / mild tune-up as evidence by the rough idle and throttle hesitation, otherwise the bike looked well taken care of.

I purchased the KZ and began the short two-mile drive home. On my way home while crossing an intersection after the light turned green I got into a small accident. A car ran the their red light and I couldn't stop in time to avoid the car. I saw the vehicle coming and slammed on the brakes, unfortunately it was too late. Both the automobile and myself came to a sudden stop with the motorcycle broad-siding the car into the driver side back door. I was mostly okay besides a bruised knee and the owner of the car was okay aside from my losing it on him. Both the bike and car had mild damage. I limped home with my bruised body, ego and motorcycle.

Due to the bike being both transferred and in an accident within the same hour, the insurance company opened a fraud investigation - the icing on the cake. Nothing came out of the investigation.

I relocated for a new job shortly after acquiring the motorcycle. This forced me to park the KZ in a storage unit along with most of my belongings.

Two years later, I received an offer from one of the guys my brother worked with to buy the Kawasaki. Since the bike was not my main motorcycle and it carried bad memories from the accident, I decided to let it go for a reasonable price. I wish I kept the bike.
Sale Date: Spring 2006