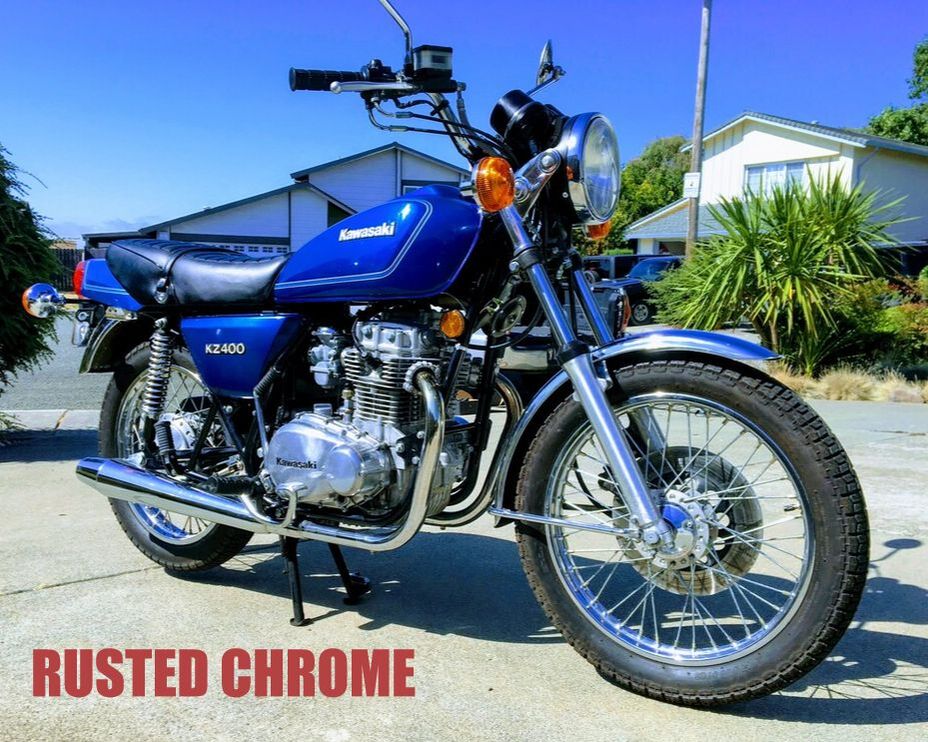 Purchase Date: August 2019
After a few hit and misses with contacts and Craigslist ads Hillary asked me, "What about this one?" I reviewed the photos posted alongside the ad and was impressed - nice and clean. I didn't get excited at the moment; "clean" looking motorcycles come across the listings fairly often. The ad was bleak, not much information. The bike has low miles too, just over 6k. I relayed to Hillary that we should jump on this one quickly if she was seriously interested.
Hillary took care of the meeting logistics with the owner which made it easy for me. In a few days we went to see the motorcycle. Lucky for me it was a short 15 miles away from home.
Arriving at the previous owners house, the shiny dark luminous blue (official color name) Kawasaki greeted us at the end of the driveway. I immediately recognized the "Kawasaki" stance, it is a highly recognizable feature. I have an intimate relationship with the ins-and-outs of these bikes after growing up around 70's Kawasakis. The transaction was swift and easy, after seeing all of the work that was completed from the bike's recent past, it was a no-brainier. All of the maintenance work to get the motorcycle up to modern standards was already completed within the past few years.
The 398cc air cooled KZ has a four stroke, parallel twin cylinder, single overhead cam engine. Top speed is 94 mph delivered by a chain drive, five speed gearbox with 36hp @ 8500 rpm at the wheel. The Kawasaki has both an electric and kick starter for low battery emergencies. Braking is modest with a single front disc and drum rear. The motorcycle weighs in at 386 lbs dry; 3.6 gal fuel capacity averaging at 56 mpg.
September 2019
The motorcycle just needed a bit of a clean up, new battery and mild tune up. I adjusted the clutch, Hillary gapped and installed the new spark plugs. We cleaned up the chain along with a tightening and re-lubing. A few more adjustments were made with the cables and brakes and we were complete. This is a solid bike that required little to make truly road worthy.
March 2020
Driving the KZ is a pleasure. This one has such low miles with everything functioning well it drives as if it was a new bike.
The only downside is the highway speed handlebar vibrations due to the high revving engine. The front end has a slight rake which derives into a bit of a heavy front end, this can also be from the larger OEM handle bars.

Due to life's many demands, the KZ was not being driven - it was time to sell. The bike went to a responsible owner, a vintage Japanese motorcycle collector whom will be sure to take care of this rare find.