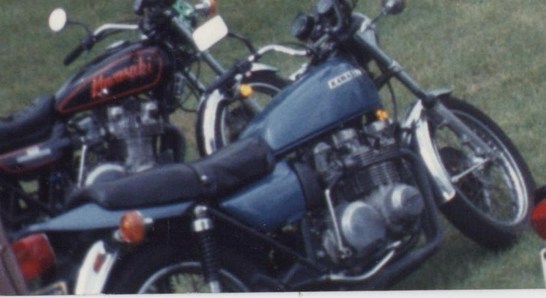 The black Z1 was my brother's, the blue bike was my KZ.
I had been sixteen years old for a few months, spring was arriving and I didn't have a street legal motorcycle to drive. My father and brother had Kawasaki motorcycles and I wanted one as well. My father found me a '78 KZ650 at a reasonable price through an acquaintance and I paid for it with some saved up money. This was my first street motorcycle.

I didn't have the motorcycle endorsement on my license at the time of purchase. Excitedly, I studied over the handbooks and passed the written/driving tests as soon as I could. The Laconia bike week in New Hampshire was exactly one week after I passed my exam. My father and brother planned a 10-hour motorcycle drive to the event and I was to come along. This adventure quickly broke me in with driving in the rain, long distance traveling, high speed driving, freezing cold morning riding, and slow and heavy traffic driving. The trip was a memorable ride for me, making a grand impact on my future.

The Kawasaki was mostly stock. The seat was replaced at some point in its life for a king and queen style seat. The exhaust headers were also replaced with short slash cut pipes. During my ownership only the sparkplugs, rear sprocket and drive chain were replaced. My father also helped paint the motorcycle from a faded red to powder blue.

The bike ran well with the exception of electrical problems. At some point in the motorcycle's life, one of the previous owners had spliced some wires into a faulty auxiliary connection and it created a chain reaction of poor wiring. I didn't know anything about wiring at the time and didn't care to learn. My father was not a wiring expert either although he was comfortable experimenting. I broke down on the side of the road about a dozen times due to faulty wiring before it was finally straightened out.

The KZ was decently powered, not too fast and not too slow. It was the perfect bike to break me into street riding. I drove the Kawasaki all over the place in our small town and surrounding area. I would like to find another KZ650 someday for a refurbish project.
Sale Date: Spring 1994