More problems; another electrical short in the wire coming from the starter button housing, not surprised by this being the short is coming from a small bundle of electrical tape that I have yet to inspect.
Update: This short was later corrected, all of the connections in the "bundle" had been re-connected and sorted.

And the wobble! A horrible front end wobble, I believe this is due to dragging left brake. Something is bent or needs a rebuild. The BMW is being pushed aside to work on another day.
March 2020
Brake Caliper: After removing the front left brake caliper I confirmed my suspicion, the piston has seized with rust to the caliper. I not-so-gracefully removed the crusty piston and inspected the damage. The caliper piston seating area is slightly pitted, but resurrected after a series of gentle scraping and chemical baths. I purchased and installed a piston rebuild kit from Euro MotoEletrics. Fixed... I have working front brakes with no drag.

Still have the wobble, but it's not so bad. - More to come.
May 2020
Front End: Tracking down this vicious death wobble, I moved to the next obvious potential solution - the headset bearings, steering bearings. Of course, under my further inspection a previous owner installed an aftermarket top triple tree bracket to replace the weak original setup, this was a good choice although they missed with installing it properly. The main steering assembly nut was not retaining the nut for bearing adjustment, therefore allowing the nut to loosen. And, the main nut was stripped. I went ahead and dis-assembled the headset components; re-greased the bearings, installed a thick washer above the bearing nut and re-assembled with the proper torques and a new OEM main nut.

Testing the bike I was sure to have success in correcting the wobble, unfortunately this was to no avail. It helped a little, but the wobble was still there. Back to the drawing board.

This appears to be in the front end by the feel of the wobble. It only happens when I turn left on an aggressive slow speed turn. It is bad, frightening even therefore not safe, not drive-able.

After reading through blogs on the internet I keep reading about a bracket behind the tool box being broken or loose and/or potentially the swingarm bearings being loose. Both of these are easy to inspect so I went to it, the bracket is intact, no problems there; next.. The rear swingarm... wait. A previous owner that messed all the other stuff up also had the rear off. I felt the rear for play and sure enough that's it! The rear swingarm bearings were very loose!
Rear-Swingarm bearings: Luckily I had the milled down socket tool from another project to access the large lock nut for the swingarm. I found the spec for tightening the nut and lock nut and went at it, centered everything up and then tightened and re-torqued everything.

I couldn't wait to take the BMW out for a ride to test for the wobble. Sure enough it was gone! Pfew. Another problem chased down.

A week later I scheduled myself for a safety check ride with the R100S to see if there was anything else I needed to immediately address. The bike ran great as expected. Next I am going to go back through the bike and fix/replace all the odds and ends to bring the bike truly back up to speed.
July 2020
Sticky Clutch: The clutch would get erratic and "sticky" after the engine gets hot. I installed a new clutch cable, the original was well worn. At the time of the clutch cable installation, I also dis-assembled and inspected all of the clutch assembly components up to the throw-out bearing; cleaned and lubed everything during re-assembly. It is critical on these to set the length of the cable at the bars, then make final adjustment at the clutch side. This cleared up the sticky situation.
Gas Cap: This bike, being a '78 is one of the few years there were gas cap venting issues. I followed the BMW service recommendations and drilled a 1.0mm hole on the underside of the cap, center 22.0mm deep. I can hear the gas gurgle now when I twist the petcock 1st thing in the morning.
January 2021
Brackets: I removed all of the brackets for the bags, including rear luggage rack. Gives a cleaner profile, don't need the carry space anyway. 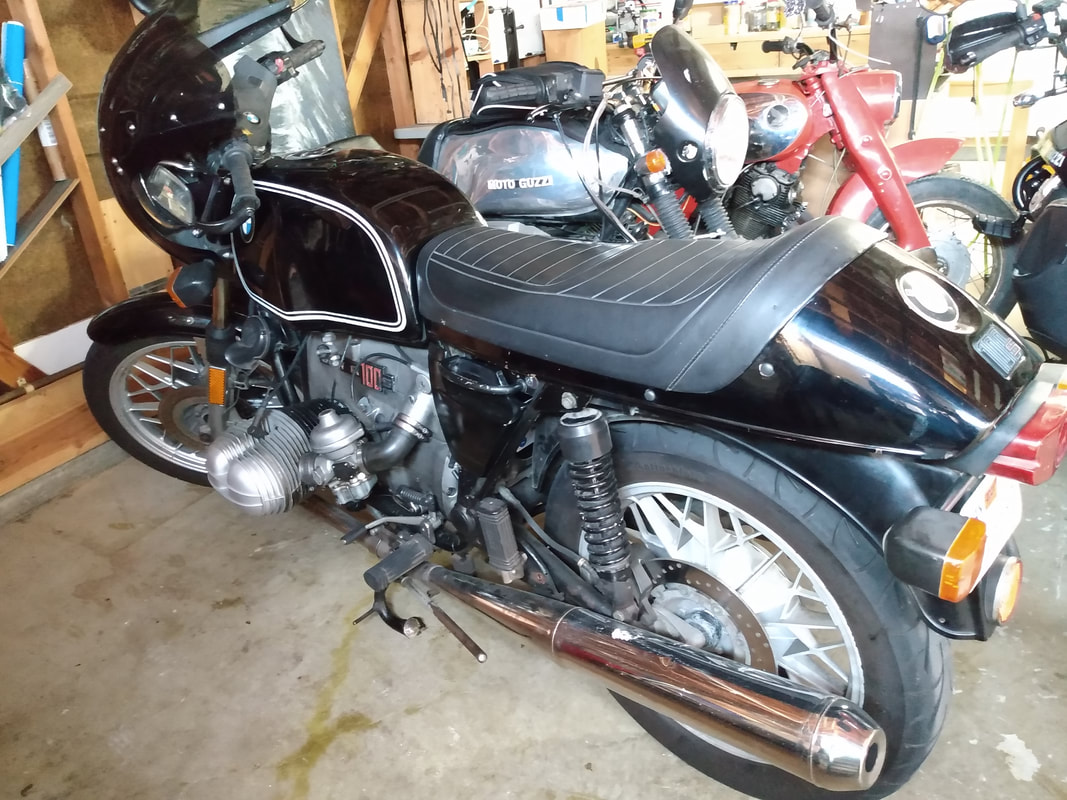 Seat: The seat still had the original cover, torn and stiff (uncomfortable). I installed some new vinyl skin, Saddleman brand for motorcycle seats was used. I also fixed the broken seat latch, key still doesn't work - at at least it latches correctly. 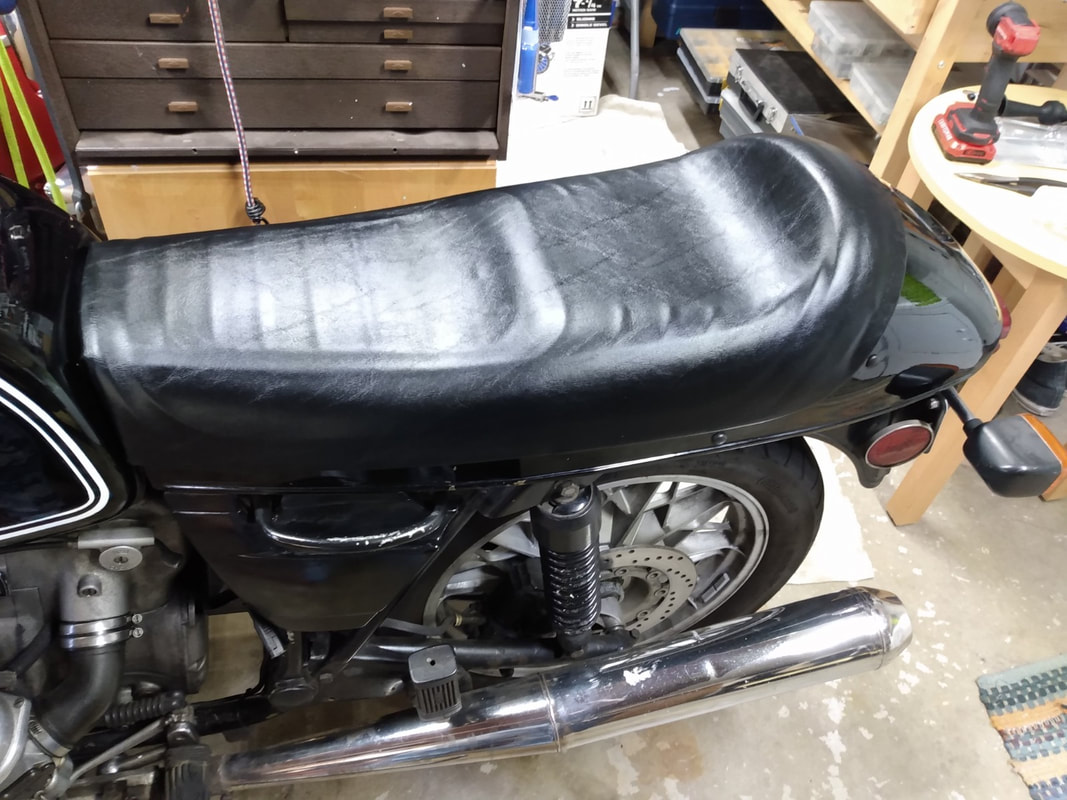 Photos and details of the R100S will be added as the project matures.