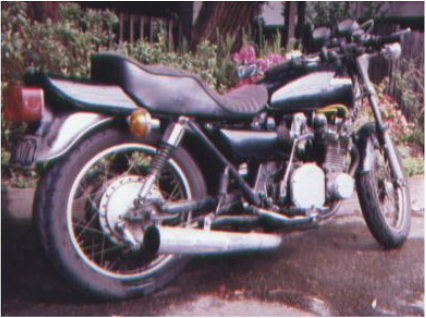 The only photo in existence.
I was driving a tired V45 Honda Magna and my father was sitting on a 1975 Kawasaki KZ/Z1 900 that he wasn't driving much. One day he randomly offered me a straight up swap: bike for bike. I couldn't refuse the offer; I'd been admiring the Kawasaki for some time.

The Kawasaki was unique due to the fact that it had the engine from a '74 Z1 900 and the rolling frame from a '75 KZ 900. The bike was modified for short distance speed runs. Modifications that my father and I completed:

Exhaust: MAC full 4 into 1 exhaust, purchased from a local salvage yard. Fiberglass packing had been removed with the muffler insert still installed. This gave the appearance of a packed muffler to pass inspections, although it was practically a straight (loud) megaphone pipe.

The KZ was fast in the straights after the modifications. The motorcycle sounded like thunder coming down the street (I miss that sound). Top speed after the gearing was only about 75-80 mph before pushing the limit of the rpms. The bike didn't handle or corner well. It was low, fast and mean.

I drove the Kawasaki from Pennsylvania to California in 1997. I relocated with the few items I could carry on back of the motorcycle. I had my share of problems driving cross country on the bike but it was all capable of being repaired on the side of the road. After arriving in California, I didn't have the tools of garage to repair the Kawasaki to the fullest and was forced to sell the bike for a more reliable motorcycle. I have many personal, fond memories of the KZ; we've been through a lot together.
Sale Date: Fall 1997