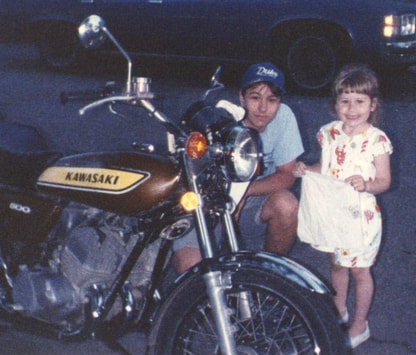 My sister Mallori helping me clean the H1.
I was 15 years old and about to embark on a long personal journey with street motorcycles.

It all started with my father and I going for a "short ride." He borrowed a loud, lifted pickup truck from a friend and we set off to pick up a motorcycle. After following napkin directions and two (long) hours later, we pulled into a small cul-de-sac outside Philadelphia.

My Dad led me behind a house where a Kawasaki H1 500 motorcycle was propped up against some old siding and debris. He pulled a random single key from his pocket and inserted it into the ignition - surprisingly it fit. We proceeded to hurriedly load the bike into the truck and started off towards home. I knew better than to ask questions about the transaction. Once home, the motorcycle was safely parked and covered with a blue tarp in front of our house.

The next morning the motorcycle was cleaned up, oil changed, fresh battery and chain lubed. After adjusting the points and a few swift kicks of the kick-starter, the Kawasaki came to life.

One Saturday morning my Dad handed me an old dirty and loose 3/4 helmet inviting me to come for a ride. I rode on the back of the H1 as a passenger not knowing where we were headed. The Kawasaki had a borrowed plate and no title. We arrived at an abandoned stretch of road with sweeping turns near a closed down Beryllium plant.

After some brief instructions, my Dad handed over the motorcycle letting me take it for a ride. The road went on for a mile or so without any cars. I would drive to the end, turn around and come back - and again, and again. I was surprised as to how heavy the motorcycle was compared to the 175 cc dual sport Yamaha I'd been driving, the acceleration was impressive compared to the small Yamaha. Being young and fearless I slammed through the gears within minutes. I remember the corners coming up on me quickly, finding myself heavy braking in a panic.

The Saturday morning rides went on for a few months throughout the season. We were having difficulties getting the motorcycle titled properly and gave up the battle. We ended up selling the untitled H1 500 to a friend of mine for a good price. This is another bike I wish I still owned.
Sale Date: Summer 1993