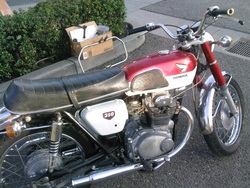 I purchased the Honda CB350 K-1 on a whim from a local salvage yard. The condition of the bike was fair with all the parts intact. Some of it needed severe restoration but it was all there. The bike had signs of sitting outside for some of its life. The cylinder compression was good. The electrical system was intact with all the lights and turn signals working. Most of all, the price was right. I found myself a new project.

The 1969 Honda CB 350 has an air cooled, parallel twin cylinder engine with a single overhead cam. Power output is impressive for the small Honda with 36 hp @ 10,500 rpm and torque at 18.44 lb/ft 9,500 rpm. The Honda has both an electric start along with a kick start. A five speed transmission with final chain drive delivers power to the rear tire. Drum front and rear brakes efficiently stop the lightweight 394.63 lb (dry) motorcycle. The small 2.64 gallon gas tank matches the lines of the CB.

A good starting point for the project is that the CB's engine is simple and untouched. The idea of making the CB a cafe racer has been tossed around. With most of the stock parts still intact, I chose to keep it original.

Below are some of the modifications and updates I completed to bring the CB up and running:

Starter Motor: Most of the gear teeth were worn for the kick starter, I chose to leave it alone for now not wanting to break into the engine case. I freshened up the electric starter with some new springs and pins instead.

Engine Oil: The engine oil came with a strong odor of gasoline. This could've been from over flooding conditions with hard starting or the fuel was left in the "on" position at some point with a faulty float needle. I flushed the oil. Hopefully the gasoline didn't corrode any of the engine seals or gaskets.

Carburetors: The rubber diaphragms on both carburetors were torn from age. I replaced them along with a complete rebuild and cleaning. 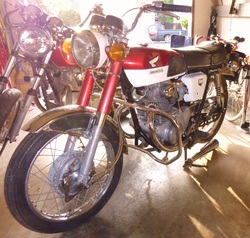 Gas Lines: A set of inline fuel filters with new gas lines. This is a mandatory upgrade to the original dry and cracked rubber hoses.

Exhaust: The mufflers that came with the CB were completely rusted out and barely in place with poor brackets. I had a set of cocktail shakers laying around that fit the Honda easily. The new mufflers were slightly loud.

Charging: I discovered an inexpensive Radio Shack bridge rectifier solution to fix common charging issues. The new rectifier worked okay for the time being, but if I were to do it again, I would spend the money on a new regulator/rectifier unit.

Ignition: An electronic ignition from Pamco replaced the condenser and points. This eliminated the typical problems that can come with standard points system motorcycles. Points vs. Electronic Ignition is a common topic found within discussion groups. It all comes down to each person's preference.

Miscellaneous:  A set of new foot pegs, new battery, lubricated cables and new final drive chain finish the job.
At the time of this project, I also had other projects going on with higher priorities. I didn't give the CB the attention and respect it deserved. After getting pushed around the garage from corner to corner, I finally decided to put it up for sale. A lucky family in the Bay Area came and bought the CB for a restoration project of their own. I was grateful to learn they intended to keep the CB in its original condition.
Sale Date: April 2014