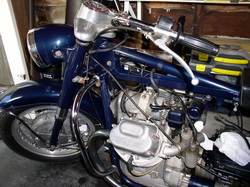 I have always adored late 60's and early 70's Moto Guzzi motorcycles.  When the Carabinieri blue V700 showed up at a local auction, house I took it as an opportunity to finally own one.

Photos representing the motorcycle up for auction were bleak, the bike appeared desperate for parts. After arriving in person, the Guzzi was complete with missing parts hidden under a tarp.  A set of Wixom saddlebags and windshield are also included in the package with the winning bid.

The auction house was pulsing with energy. "SOLD" being overheard in the background every few minutes. Only a handful of vehicles are up for auction with the Guzzi reaching the block at the end. A 60's GMC truck went for an extremely high bid making me nervous about the upcoming bidding. It was time for the V700. Silence enveloped the room as the bidding started way.  As hands were going up as the bids started low, I was waiting to steal the bidding at the end before the closing bid. Before I knew it, bids were between a phone bidder and myself. Luckily for me the opposition bowed out at my personal max, I took the win. My heart was beating with excitement as the audience applauded and Hillary gave me a big hug. 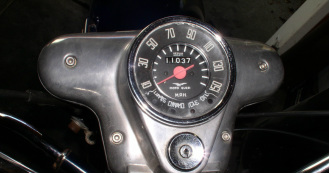 The motorcycle is a 1968 Moto Guzzi V700 Polizia, an early model initially produced for the Italian National Military Police. A local, one owner vehicle with just over 11,000 miles. All the paperwork and manuals including a box of goodies came with the sale.

The '68 V700 has a right side shift, four speed transmission. A low maintenance shaft drive and 300 watt Marelli Generator are ideal for police department services. Dell'Orto SSI 29mm carburetors, originally designed for racing motorcycles, deliver fuel to the 704cc V-twin. Power delivery is a decent 49.30 hp @ 6,300 rpm with a torque of 36.165 lbs/ft @ 5,000 rpm. A stylish and functional front end along with 18" Borrani rims complete the Italian motorcycle.
March 2014
Driving the V700 has a similar feel to driving an old muscle car - a very raw sense of machine. I have only test driven the bike a few miles as I go over the components one by one. The ride is a lot of fun and I am anxious to get the motorcycle flawless and truly road worthy.

Carburetors:  I've completely disassembled and cleaned the carburetors in an ultrasonic cleaner. The Dell'Orto SS1 carbs were then brought back to life with some replacement parts and gaskets from Guzzino.com.
April 2014
Spark Plugs: Installed new spark plugs from a local auto shop.

Rubber Boot: The rubber boot between the carbs and air cleaner was badly damaged and I found a new one at Harper's Moto Guzzi.

Rear Brakes: The rear brakes needed a minor adjustment to keep from rubbing.

Seat: A new solo seat from Harpers Moto Guzzi. The seat is attractive, light and comfortable.

Carburetors (Again): I've been having difficulty getting the SS1 carbs to manage fuel properly. After doing some extensive research, fuel leaks on the SS1s are common and can cause fires. The original set leaked gas through the vent holes after sitting and idling at lights. The jetting and mixtures were perfect for driving and idling. Since the leaks were a problem I had to do something about it. I found and purchased a set of Dell'Orto VHB(C) carburetors on craigslist that were off a running Eldorado. The "new" VHBs came with the necessary manifold connections and pod filters. I connected them and re-tuned/synchronized the V700.

Cables: Installed new lower throttle cables from MGCycle along with the VHB carbs.

Mirror: I found a round 3" mirror in the garage that fits well on the crash bars.

June 2014
Air Cleaner: I removed the pod filters and added a single, central K&N filter I had from another project. The pod filters were allowing too much air into the carbs, leaning out the air/fuel mixture.

Paint: I found a close matching paint from Automotive Touch Up: "2003 Fiat: Blu Carabinieri Opac 439". The paint is useful for small touch ups and cosmetic blemishes.

Saddle Bags: The Wixom panniers that came with the bike were in bad shape. I stripped the hardware and trim off the bags down to the painted fiberglass. After filling in some of the pits and scratches, I added a few layers of clear coat acrylic paint. The clear coat brought the faded colors back to life. New hardware is in order along with chrome trim, wiring and a lens cover. To be continued...

Battery Tray: I installed a new battery pad along with the ratchet tie down system for the battery itself. The previous brackets left the battery loose in the tray.
July 2014
Battery Cover: Since I did not use the OEM air filter / box, the front of the battery was exposed. I transformed a sheet of aluminum sheet metal into the new battery cover. Painted it black. 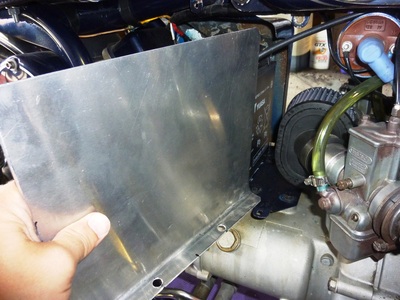 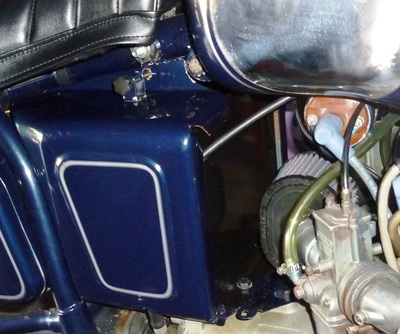 August 2014
Rear Brakes: I installed new "modern composite" rear brakes (purchased from MG Cycle), replacing the factory asbestos pads. I was forced to grind down the ends slightly allowing the shoes to fit inside the drum. Drums were cleaned and springs lubed. 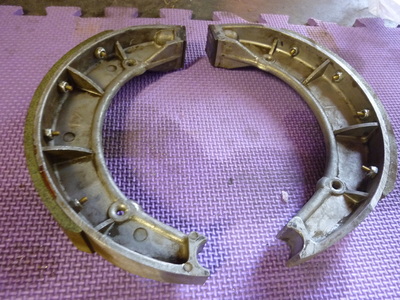 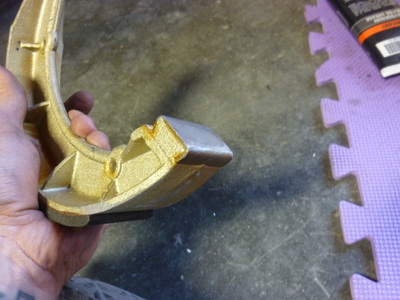 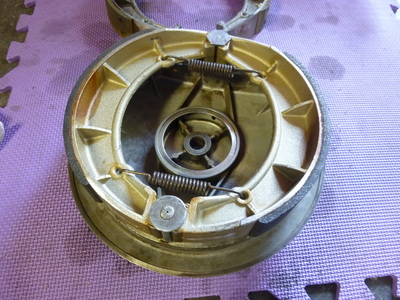 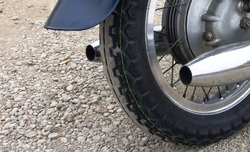 Rear Tire: A new 4.25/85-18 Dunlop K81/TT100 tire along with new tube was installed on the rim by Hayasa Motorbikes. I finished the tire assembly by mounting the rim to the final drive, brakes and frame. Fresh moly paste was added to the final drive splines.
Saddle Bags: The Wixom saddle bags "mild" restoration is complete. Bags are installed including new: locks, hardware, chrome trim and aluminum mounting brackets. A quick clear coat of paint and polishing helped the color come back to life. 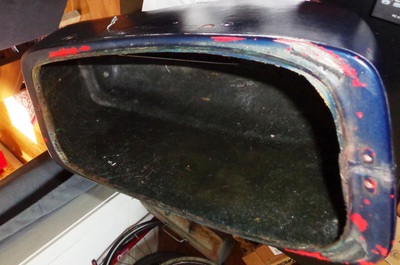 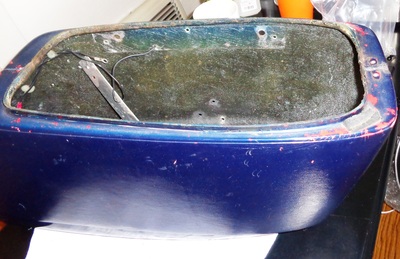 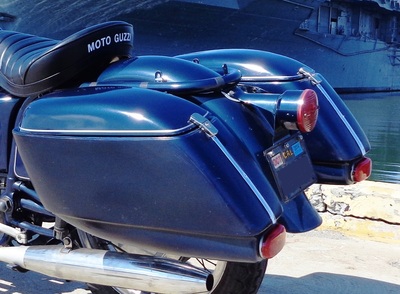 December 2014
January 2015
Cylinder Heads: I have been hearing a different sound from the right side cylinder area, it didn't sound right to me. I recently adjusted the valves myself, they are to the correct specs therefore I know they are not the culprit. After pulling the belly pan, I found exactly what I had feared most. Small metal chips. This means the original Guzzi cylinder chrome lining on one (or both) of the cylinders is starting to peel / flake. I had begun the initial dis-assembly of the cylinders for evaluation. 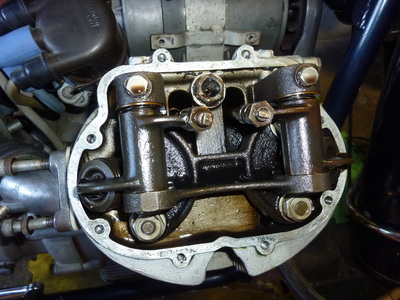 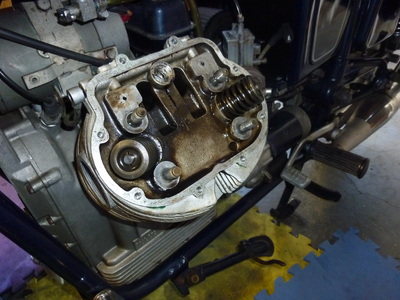 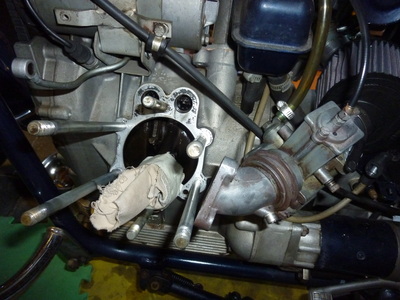 March 2015
Cylinder Heads / Pistons: I was forced to replace the cylinder heads. I decided to go with a new Gilardoni piston / cylinder kit from ﻿Scrambler Cycle﻿. The new Nikasil plated cylinders increased the bore from 703cc to 757cc.
The outer diameter of the sleeve that fits into the engine was too large for proper fitment, these were made for the V7 Special and not the V700. To resolve this, I had a few thousandths machined off by a local machine shop. Afterwards they dropped in perfectly. I replaced all the gaskets and o-rings along with the cylinders.
After adjusting the valves, starting up and driving the V700 was a blast. There is nothing like completing engine work and enjoying the fruits of your labor. I don't notice the larger bore size, although the engine does have a smoother - more balanced feel.
November 2015
The V700 gave me a good run for the summer. In late fall, after a short 40 mile ride the old Guzzi decided to leave a good sized puddle of oil while parked outside of a friends garage. I suspect this is due an aged rear main seal, time for a tear-down. I expect this can get expensive replacing components just because I will have the clutch disassembled and the gearbox will be out of the frame; the "may as well replace this" syndrome.
December 2015
﻿I finally got around to removing the gearbox. I broke down and ordered a flywheel and ring gear holding tool from MGCycle for removal / installation assistance. Upon initial inspection: I'm going to evaluate all of the components and decide what is required for replacement. As well as the "while I am in there" parts. 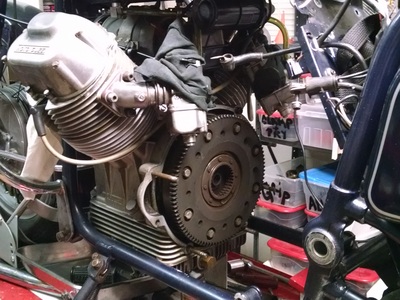 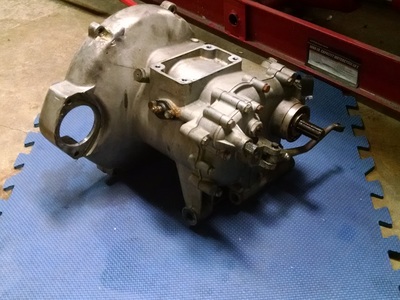 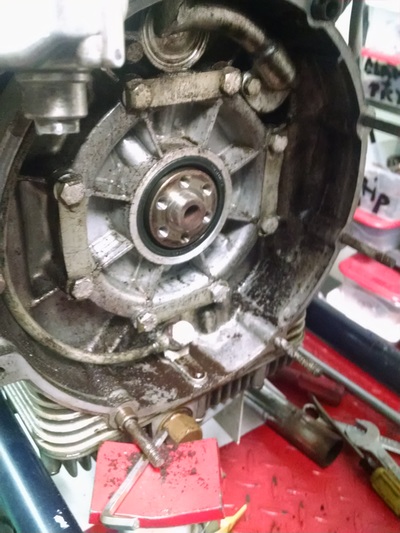 January 2016
Clutch: I installed a new set of Newfren clutch plates along with new springs, hardware, and a new clutch throwout bearing; all purchased from MGCycle.
Seals: I removed the dried up, nearly 50 year old rear main seal and replaced with a modern viton type sourced purchased from eBay. I also replaced the two shaft seals on the gearbox, those came in a gearbox gasket kit from ﻿MGCycle﻿.
Shifter Return Spring: After reading blogs, replacing the older four speed shifter return spring with the newer style required for the five speed gearbox is the thing to do (while in there). I purchased the five speed shifter spring from MGCycle and installed. The arms of the new spring were about 1.5-2mm too long and interfered with the casing, I ground them down to size and re-installed. Beware, this spring can easily be installed wrong; the installation technique is not obvious. It is a good idea to think this through and possibly double check with images / videos online.
Miscellaneous: During re-assembly I added a new front brake line cable, re-greased all the splines and added fresh gearbox / motor oils.
July 2016
Gearbox: I installed the new input shaft bearing and reassembled. Much better / smoother drivetrain all around. This much have been an issue for a long time.
November 2016
fuel gasket: There had been signs of the fuel dripping over the sides of the filler cap after I fill the bike up with gas. Under inspection, the fuel cap gasket is aged. I purchased and replaced the aged rubber gasket.
April 2017
Gearbox: I had been having problems with positive shifting from 1st to 2nd gear. I had done some research and one of the fixes is to install a more modern style shifter detent plunger with a rounded end. I tracked one down from a V7 special and installed it. The shifting is much better, although 1st to 2nd gear miss-shifts are still there off and on. I have a technique for shifting that works most of the time and ensures the positive shift most of the time, I will continue to use my "technique". Going back into the gearbox and re-shimming is not an option at this time.
September 2017
I've had the V700 for a few years and as of late I haven't been driving the bike too often. The registration is due next month, the battery is on it's last leg, it needs a new front tire and the difficult to find front brakes likely need relining. After enjoying the bike, it's time to let it go to a new home. I can't justify spending any more cash on the bike riding it as little as I have been.

I put the bike up for sale at a good reasonable price for the new owner to fund the "needed" items that will bring the value up to a solid blue book value. I am taking a hit on this one, although I had a great time with the bike and I learned a lot so I'm able to accept the; loss plus I currently need the cash. I hope I don't regret selling this one (I have a feeling I might).

The bike sold in under a week after putting up the ad. It was sad to see it go. I hope the new owner takes good care of the Guzzi and brings it completely back to it's original shape as they mentioned they will. The bike is going to Nevada, a nice dry state where it will hopefully live for another 50 years.