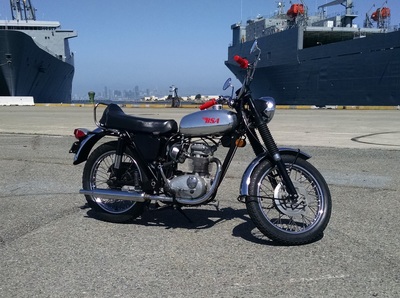 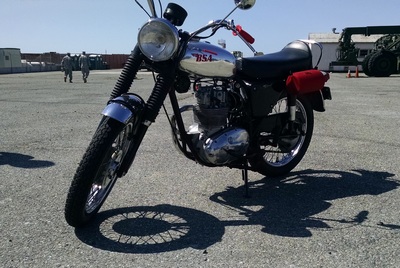 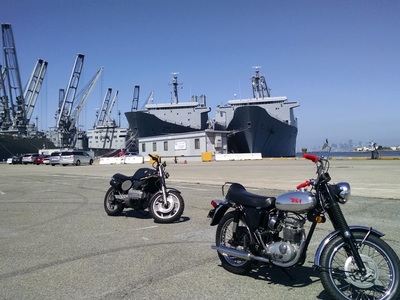 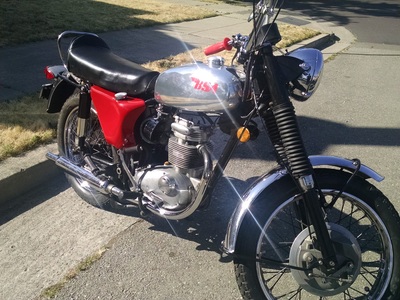 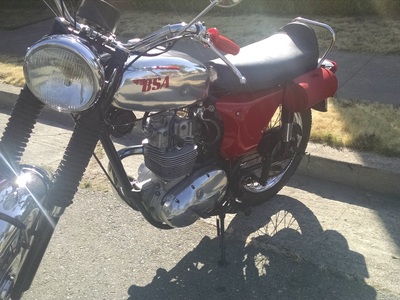 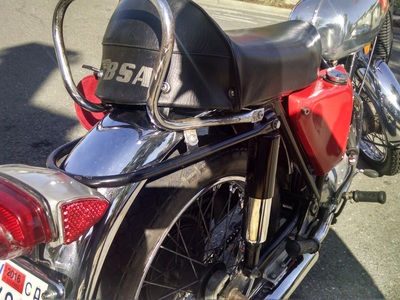 Purchase Date: October 2015
I called the number and discovered that the owner was leaving town in a few days, the transaction will have to happen promptly. Hillary and I made arrangements to take on the two hour drive later that evening. Upon arrival, the bike was cleaner (less rust and wear) than I had initially expected. It started up within a few kicks with the engine sounding as it should. The typical oil leak out of the rocker cover was there (the oil return works), the tires even looked good. Everything was lining up for a smooth sale. I took a minute to discuss with Hillary the nuances of having a kick-start only bike, as to how this may be frustrating for a beginner. She gave me the thumbs up to make the purchase.
I paid for the BSA in cash and started to load the bike into the truck while the owner went to grab the title. After a few minutes, I had the bike all strapped down and we were still waiting. After some time we went by and we went to track down the owner. The owner, all liquored up, could not find the title; he supposedly had it earlier that day then misplaced it. We waited for another 20 minutes or so while the owner swore and rummaged through his house.
At this point Hillary and I took the bike back out of the truck; the owner handed me the cash. I was tired from a long day of work, driving, and the messed up transaction. The owner promised a phone call after finding the title.
Early the next day, the BSA owner left a message that he did indeed find the title and can deliver the motorcycle to me later that day. I agreed, he delivered, and the bike was ours. Hillary has her first motorcycle which she named "Blue Bird".
The 1968 BSA B25 Starfire was a simple, one cylinder "Thumper" motorcycle. BSA had been making 250 singles since the late 30's, therefore this was a proven machine. Inside the air cooled engine, the B25 (249 cc) was produced with an aluminum alloy head and iron liner. The cylinder bore was 67mm x stroke 70mm giving the compression ratio a whopping 10:1. A single 928/20 Concentric Amal carburetor was fitted to provide the needed fuel / air. The overhead valves can be easily maintained by a small cover on the right side. A single set of points, also on the right side under a small cap makes for easy points gap checks.
The Starfire had a wet weight of 290 lbs. Power claimed is 25.8 hp @ 7,250 rpm. The BSA had a four speed constant mesh transmission with wet multi-plate clutch, linked to a final chain drive. Top speed was approximately 84 mph., that's fast for a small single if you ask me.
The first thing I did was an initial inspection on the BSA. This is what I found:

All of these will be corrected along with the valve / point checks, etc... I look forward to working on the BSA. This will be a fun adventure, It is Hillary's motorcycle and she's offered to help out with the recondition process.
October 2015
Before working on the BSA, I take it out for a short test drive around the neighborhood. After my drive I pull up to the garage with a huge smile on my face. These smaller motorcycles are a lot of fun buzzing around town with. I wouldn't "borrowing" this every now and then.
Wiring General: The wiring on the bike, hidden under the seat, gas tank and left side cover was completed in poor taste when a previous owner installed a Mity Max unit. With minor guidance, Hillary is progressively cleaning up the wiring. We will be keeping the Mity Max.

Handlebars: The bars that came with the BSA were small, scrambler style. Hillary and I wanted the bike to get back to its original roots, therefore a set of “western style” bars were ordered through ﻿Classic British Spares﻿ and installed. I also ordered and installed a set of red OEM style grips (design preference by Hillary to match the gas tank emblem) from eBay.
November 2015
March 2016
Mirrors: Hillary added a new set of 4in diameter mirrors to the underside of the bars. They look and work surprisingly well.
June 2016
Mirrors: The mirrors installed "upside down" worked well for the time being on the black gas tank. Although when installing another tank they were an obstruction while turning. We flipped them around to the right side up position where they function (and look) much better.
Like most motorcycles I've had the pleasure to drive over the years, the BSA was no different in that it was a lot of fun to drive. With proper tuning and all safety inspections completed, the thumping single always left an ear to ear smile on my face. Ignition on, gas on, a little tickle on the Amal - kick through the clutch plates, a few priming slow kicks - and one swift kick the BSA would roar to life. In my opinion, the raw visceral effect classic motorcycles can deliver far outweighs that of most modern bikes with a push button start and whispering exhaust note.
Hillary and I had fun with the single thumper, although it was time to let "Blue Bird" go to another owner. After posting in Craigslist ads for few weeks, we had a solid bite for an XLH trade, we made the deal and bid our farewells to the BSA.
Sale Date: September 2016